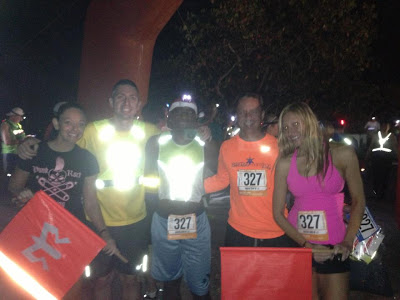 Last weekend, ten friends and I departed Tampa for an amazing relay: Ragnar Florida Keys. Initially there were 12 of us but due to an unforeseen and unfortunate accident, we lost one runner with a fairly serious injury. He wound up in the hospital but is fine now, thank God. Thus, our 12 person team became an 11 person team.

I consider myself a Ragnar/relay veteran since I’ve now completed four of them. I’ve enjoyed every single one and can’t wait to do it again. This year was tougher due to the added mileage but finishing in Key West was so worth it. I only wish I could have stayed a little longer.
As a runner in Van 1 we got to start the relay off and it’s always fun to see your runner take off under the big Ragnar banner. Team Running Down My Leg was off dark and early at 5:30 AM. Yup. We had a super early start. Our thinking was that since we weren’t a team of gazelle’s (plus a man down) and wanted as much time in Key West as possible the earlier we started the better.
﻿﻿﻿﻿﻿﻿ I was initially runner #4 but we switched things up a bit and I became runner #5. My first leg was a breeze. A nice 3.6 jaunt in Miami. It was a bit warm by the time I got started but not nearly as warm as it would get for Van 2. I felt bad for them because their runs were gonna be smoldering.
I wound up passing a ton of runners on this leg and in customary Ragnar tradition, I counted my kills. I wanted to take this run “easy” but got kill greedy and was closer to race pace than I would have liked. I did have some fun along the major road I ran on by cheering back at some hombres who yelled things at me in Spanish. It could have been “Move your fat ass!” or “Hey skinny white girl!” But more than likely it was “You’re so awesome to be running down a major road in Miami in the heat of the morning and we wish were too!”
﻿﻿﻿﻿﻿﻿Van 2 wound up taking the runner #6 leg at this point. Our van finished up and we were off to the exchange we would try to rest at, the Homestead Miami Speedway. It was at this exchange that my girl Katie and I decided we needed s’mores. Ragnar always has a s’mores stop and even though it was about 10 or 11 in the morning we thought it was a great idea to eat them. ﻿
﻿﻿﻿﻿﻿﻿﻿﻿﻿Since this was our “rest” exchange we all settled down in the van for a teeny tiny bit of shut eye. It didn’t work too well for me because I got really hot even with the van on. I tend to become a furnace when I sleep anyway so after a short time I got up and slept under the speedway bleachers with a few hundred of my closest Ragnar friends. The SO joined me and it was quite romantical. What? You don’t love sleeping on concrete with the sounds of cars whizzing by?
Van 2 soon joined us and we were off for our next round of run.
Our first runner Dee was off. He was followed by Katie, then Lance, then Nick (AKA SO), then me. It was getting dark quickly and I feel as though everyone had a fairly tough run at this point in the relay. I will say that Nick’s leg was an 11.8 miler in the dark in an area with no van support and what was only a 7.1 miler for me became a 7.1 plus 7.8 mile run. Yup. Fifteen miles at about 10 PM in Key Largo.

Speaking of Key Largo, did you know it’s creepy at night? Well, it is. I started the 7.1 mile leg and it was dark. I had on my headlamp and vest and back light per Ragnar rules and I still felt sketched out. I passed a couple of dudes so I was happy to have them behind me but I got nervous as I kept seeing some unsavory characters in my path. A woman in front of me from team Jugs (snort) could be seen by her back light and vest. At one point she appeared to stop and look behind her. I realized it was because another unsavory had come up in our way. I yelled, “I got you girl! Keep going!” She yelled back “Thanks!” and on we went. She yelled back to holler if I needed her and I told her to do the same. Our pace had definitely quickened.
I think Jugs slowed down some and I caught up to her at a light. We chatted about our teams and she told me she used to live in Tampa. We decided to try to stick together although I knew she was hurting and I had another leg to run. She told me she needed to slow down but would try to stay with me.
At this point, I felt good. You know that phrase about running (Disney marathoners avert your eyes) that says, “If you feel good during a marathon, just wait.” Well that’s how this run went down. I was probably holding steady 9’s and told the SO that when I got to the exchange. Only there was no exchange for me. I ran on as runner number 6.
The first mile, er the eight mile ticked by and I looked at my Garmin to see 9:15. Ok, cool. I’ll just hold 9:15, I thought to myself. Then I hit miles ten and eleven. I looked down and saw 9:20. Ok, cool. I’ll just hold 9:20. At about eleven and a half, the wheels fell right off. I hurt. I mean I hurt like a marathon hurt. I tried to tell myself this was just like a standard long run but my body knew different. I kept running, slower than I’d like, but still running.
When I finally saw the “One More Mile” sign I almost cried. When a car drove by with some idiot who yelled, “CAN’T YOU RUN ANY FASTER PUSSY?” I almost cried again. Yes, it’s hilarious now. At the time, not so much. I wound up averaging 9:25 for the whole fifteen. Not my best showing but hey, what can you do?
When I handed off to van 2 I immediately felt like poop and had to go sit down and bring my heart rate down. I didn’t want to eat or drink a thing, a good sign I was dehyrdated. The SO took great care of me though and had a delicious Cherry Coke waiting for me. With this hand off, we had official rest time again. And showers….
To be continued….