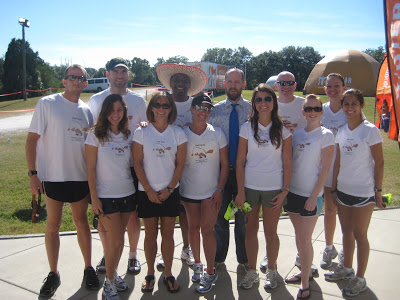 Running the Ragnar Relay gives you a chance to run in places you wouldn’t normally. Because if you did, you might get shot. Or maybe you just give a pimp a high five. Or hear woodland creatures chasing you. Or run through suburbia. Or get passed by that effing Peter Brady.

This is why I love the Ragnar Relay.

As you all know I, with 11 other Half Nuts, ran from New Port Richey to Daytona Beach. That’s 202 miles of sheer madness. For starters one of our vans wouldn’t. Start that is. It was just your basic, run of the mill lemon. We had to buy a battery for it just to get through the race.

The Ragnar Relay has teams start in waves and due to van issues and some other random silliness we started with our first runner at the start line by himself. It was actually pretty funny. All of the Ragnar folks cheered our solo runner on as he ran through the start archway and got us going.

Now, I hope you all know how this whole relay thing works. Two vans, 12 runners, and not a lot of sleep. The first van’s runners take their first turn running and then get to rest while the second van makes it way across the state. This repeats until all are delirious, stinky, happy, and finally in Daytona Beach.

Team Half Nuts shown here. Please note awesome bloggers Spike, and Red. Please also note that due to my giant stature I have to stand in the back row with the boys. Just like in the 5th grade. Sigh.
While Van 1 got going my van, Van 2, decided to get some grub and finish decorating our van. Oh, it’s the moment you have all been waiting for. My van decoratin’ skills shall now be shown to the world. 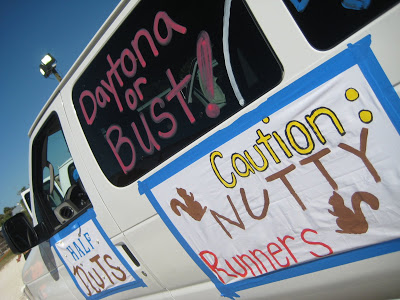 Ok, so we also added lights and a giant acorn on the front but honestly, this post is going to be as long as War and Peace if I add more photos. Oh and the acorn totally fell off, which was actually kind of cool but mostly cause no one got killed because of it flying into traffic.
As Van 1 finished up their run we headed to the exchange so that Red could lead us off. She was runner number 7 and Spike got to pass the “baton” to her. The “baton” is really just a slap bracelet that will cut a bitch if not careful. Red then handed off to Caribbean Steve who handed off to P-Funk. Then it was P-Funk to me, me to Little J (AKA Pimp High Fiving Soccer Mom). (That was a little like the bible right there? Wasn’t it? With all the begetting and such. Heh. Sorry, I digress.)
My first run was at exchange 9 and it was a 3.5 mile run. While at exchange 9, Red and I met some very interesting characters from a team called Normal People Would Drive, team number 11. They were the most obnoxious, and yet somehow, funny group of dudes that kept us entertained at some of the other exchanges. In fact, a friendly (or not so friendly) rivalry began with team number 11. There was much trash talking and I love a good trash talking bout personally. 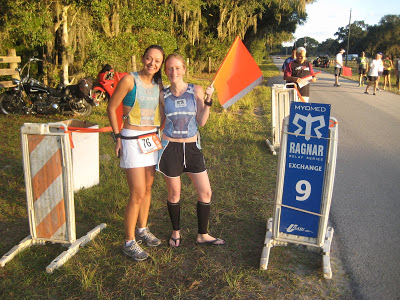 Me and Red at exchange 9. We had to use those flags to cross the street. We rather enjoyed those flags as they were used to cross sidewalks just for the hell of it. 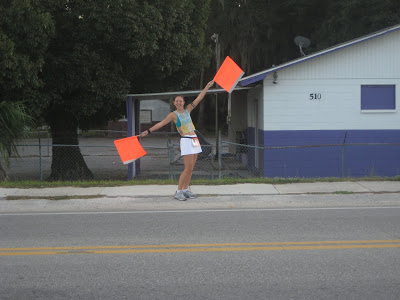 I was very happy with my first run. I think I was close to 7:40’s. There were a lot of hills this first run but I started at about 5 or 6 PM so it was not too warm and I had light for most of the run. The route was pretty and I got to see some beautiful farm land. I don’t know if you all know this, but I love a cow. Even if they won’t let me hug them.
Since we started later than most teams all of our first runs were solo. Not many runners too catch at this point although we would start catching them pretty soon.
After we finished up our first legs, with everyone kicking butt pace-wise, we headed to get some shut eye. There was another incident with someone running some extra mileage but I’ll let them tell it.
Before we got to the sleeping exchange area we of course stopped at McDonald’s. I would like to point out that for some runners we sure did go to McDonald’s a lot. While I love a french fry, we all know about my PC issues. The good thing is that McDonald’s has excellent restrooms for changing. Sure the ladies just going there to eat look at you weird whilst you brush your teeth, but the hand dryers work great for stinky pits.

Other things to note for these first legs include:
Little J high fiving a pimp. It was magical. And there was no real initiator, they just instinctively knew to high five.
Carribean Steve mooned us. His moon is not white.
Red scolded P-Funk about her seat belt and still pees a lot.

Legs two and three are coming up and leg two was extra special as it was the jammy themed run….