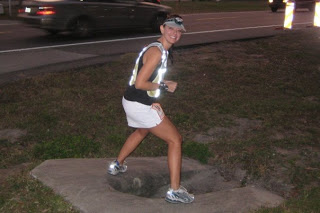 (Me, being classy and pretend pooping before my first leg. Yes, I always look that happy when I poop. Doesn’t everyone?)
We left off at the end of Van 2’s first legs. I must again mention how useful Jesus John’s huge tent was. (And his teaching C Steve how to pitch one!) Unfortunately, not everyone had sleeping bags and thus some were cold. Fortunately, I was not one of those people. This meant about 2 blissful hours of sleep for me.
Apparently there was a little redhead who woke up Jesus John every few minutes to the sound of “zzzipp….zzzipp..” as she left to go tinkle. Caribbean Steve said he never knew of anyone who “went” so many time in 30 hours! Hey, the girl is super hydrated and her bladder was nervous.
On the way to the first exchange it was very dark and a certain conversation went like this:
Half Nut Girl: “Is this an exchange?”
Half Nut Guy: “No, it’s a DUI.”
Did I mention I can sleep in almost any position? See below as evidence. 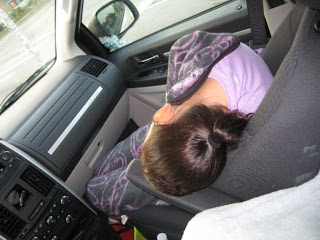 In addition to the zzzippp-zzzzipping, while all but one of us slept, er tried to sleep in the tent, P-Funk remained in the van. However, when the last little Half Nut headed to the tent he left the light on inside. Just as we settled we all hear furious pounding outside of the van. We look out to see a a very P.O.’d P-Funk pounding on the inside for someone to come turn the light off in the van. She was in the way back and would have had to climb three rows to shut it off. I totally felt her pain.

Now if you knew P-Funk at all, you would know that she is the nicest most caring, considerate person in the world. Just don’t leave a light on when she is trying to sleep. It was like the alien on the side of the plane in The Twighlight Zone’s Nightmare at 20,000 Feet. LOL! (Sorry P-Funk, I had to use that analogy. You are obviously much cuter.) Upon waking, C Steve sets out for his first run. At this point we have entered Clermont and get to run on some trails, which is nice, except it’s O’Dark Thirty. After C Steve, Shorty Shorts Jason makes his second run seem easy and then it’s my turn again.I was a little tired at this point but not too bad. I had a 4.2 miler run and didn’t realized quite how hilly it was. My lady parts were VERY sore after riding a bike for Jesus John during his first run. Ragnar Lesson #4: Test the bike before offering to be a bike rider for support. Oh my God was the bike too tall! It was funny after, but during the ride I was hurting in my neck, my back, my neck and my back! I also hurt my lady bits and couldn’t hand Jesus John the water to save my life. Poor guy was all over the place trying to get it off the bike. I told him after that I was just trying to get him to run faster. Ok, so back to my 4.2 miler that was hilly as all get out. It wasn’t as big as P-Funk’s hills but it was tough. I managed to pass about three other runners and kept an 8:08 pace. (Again who is this speedy BoB?) Jesus John rode the bike with me and kept telling me there was a team behind me about to catch up. I think he was lying, but it totally helped me keep the pace. P-Funk followed my run, then the same rotation again, the Redhead and then our fearless Captain Nut. It was almost light out at this point since we ran through most of the night. Our final exchange had us resting a little before sunrise. To say we were punchy at this point would be an understatement. For example, I think we were figuring out how to spell out farting sounds. Half Nut Girl 1: “How you spell out poop noises?”
Half Nut Girl 2: “I think there’s a V.”