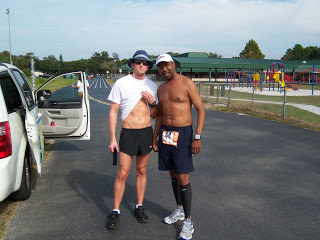 Van 1 finished up at about 11:40ish, giving the sun just enough time to really work up it’s mojo. Believe you me, it was hot on Saturday. Even a man who goes by the name CARIBBEAN Steve, was toasty. His first leg ran him straight through the hood. He obviously didn’t mind, cause, well he’s a brother.
Up next was Shorty Shorts Jason. Jason got this nickname because right about this time he decided to put on his “fast” shorts. Which, may or may not have shown a wee bit too much thigh. Then again, I have seen much worse on the beach and Jason is super fit!

SS Jason and C Steve showing off their respective abs.
Shorty Shorts Jason overtook two runners and also ran great despite the heat. I was up next. Oy.
This 7.6 miler was tough for me. It was about 1:50 in the afternoon, not a lot of shade for the first 5 miles, and I was just plain tired. As I was running I thought of BRA Zen Runner Tam, who is serving in Iraq. She used to run hills with me and say, “Just put one foot in front of the other BoB.” I kept repeating this and thinking about her serving her country and it really helped me. I would do it for Tam! By mile 6 I felt strong again and knew I could push it. I wound up passing two runners (who were actually run/walking, so I’m not that cool). My average pace was a 9:17. Not what I had hoped, but I’ll take it. 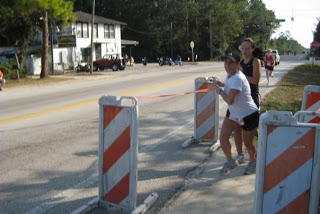 Me handing off to P-Funk.

I handed off to P-Funk who flew past 3 runners on a nice little three miler. She handed off to the Redhead who ran a very respectable if not annoying 6.3 miler. Let’s just say traffic lights were not nice to our Red. (See her blog for details.)

Finally our last runner brought us in. 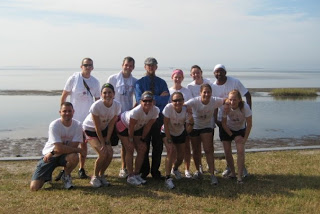 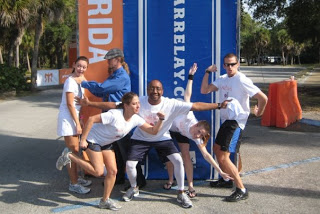