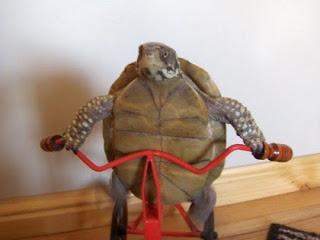 Every year I race the Top Gun sprint triathlon and every year I get a little faster in at least one of the disciplines. I love doing this race every year because it let’s me compare and see where I can improve and where I have improved. Being an endurance athlete means reviewing your progress and working on ways to get better than you were before. It’s just you versus the yourself. And maybe some girl who beats you every year, dammit.
Top Gun is also the very first real triathlon I ever completed. I borrowed a friend’s road bike, without clipless pedals, and swam in a sports bra and tri shorts that were given to me. I wasn’t really invested and my bike time was slow as molasses.

In addition to slow bike times my transitions were REALLY slow. In fact, in looking at my transitions every year, they aren’t really my strong suit. I’m definitely going to need to hustle on Saturday if I want to beat that fast beeyotch my time from last year. I am not ready for the flying dismount and shoes clipped on bike pedals deal yet. I will start practicing that at some point but not just yet.
Anyway, I totally geeked out and put together a snapshot of my times from the past three years to see the changes in my times. I made a big jump from 2010 to 2011 but unfortunately, 2011 didn’t have the transition times broken out due to a timing chip issue so I can only guess at those. It’s interesting to look at my run because it seems to be about the same every year (2011 has T2 added in). The 2012 run I opted to run a tad easier because I was coming off of my fake injury. My swim and bike have gotten faster each year. The swim from last year was probably a fluke as we had a strong current and almost everyone posted ridiculous fast swims. Here’s hoping for that again this year!
The distances are as follows: 1/4 mile swim, 10 mile bike (it’s actually a bit under ten but this what the race deems it so I’ll go with it), and a 5K run.
Here’s my stats from the past three years:

Going in to this race I am feeling the best about my cycling. I haven’t been swimming nearly enough and my run is just starting to look like it has in year’s past. This Saturday will be very interesting. Regardless of the outcome I always have such a great time with friends and the post race celebration is super fun. Of course, the added twist to this entire thing will be how I feel come Sunday morning when I attempt another sprint triathlon the very next day.
Happy Tuesday friends! Ever do any back to back races? Is there a race you do every single year?