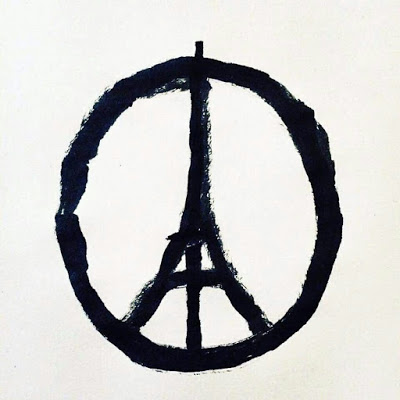 Ah, home sweet home. Nothing like a trip to Las Vegas to make you really appreciate your quiet home life. As much as I LOVE sin city, it sure is nice to be back to that humidity I love to complain about.
I’d be remiss as a blogger to not mention how deeply saddened I was to learn of the events that transpired in Paris as we were touching down in Vegas on Friday. My heart and prayers go out to victims and their families.

Friday and Saturday
Now on a lighter note, we did have a really good time in Las Vegas. After arriving on Friday and settling in to our hotel, Bally’s, we met friends for dinner and then headed to what I call “Sad Vegas” to zip line. Two things: Bally’s, while not one of the high end hotels of Vegas was PERFECT for the race with quick access to the monorail. I highly recommend staying there if you are planning to run Rock N Roll Vegas next year. The second thing is that Sad Vegas is really just old Vegas and it’s quite an experience. Think: lots of interesting folks who are there for the cheap booze and even cheaper gambling. I ain’t hating, it’s just really different than the newer parts of the strip. And, the zip lining is a must do.
On Saturday morning, I met up with Lisa from Run Fast Mama and another friend, Stacie, from the Century Club for a little shake out run. The Century Club is an online group that encourages each other to reach 100 miles every month. I was recently added by my new friend Beth that I met at the Cocoa Beach Half. The running community is so crazy connected that Lisa and I realized we have quite a few friends in common already!
After the shake out run, I ate a super large crazy buffet breakfast and then putzed around the hotel as the S.O. slept off his late night of poker playing. We then headed to the expo to grab our bibs. As far as expos go, I think the Rock N Roll Vegas expo is fantastic. It’s got everything you need (or want!). I bought a pair of Brooks running shorts that I’m currently in love with. (I wore them for the race on Sunday.)
We left the expo, showered and changed back at the hotel then headed to dinner with friends at the Linq. The Linq is a newer hotel with a shopping area and it’s really nice. I recommend that too! After dinner we headed to Planet Hollywood to see the one and only…Britney Spears. 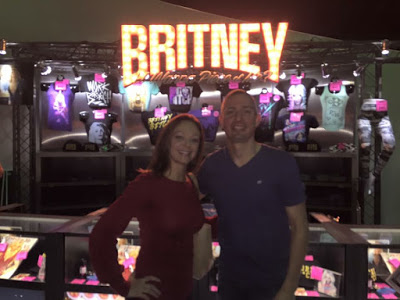 I felt it was my duty to see Miss Spears while in Vegas because I wasn’t sure how much longer she’d be performing. (As it turns out, she’ll be there two more years.) I knew that if we didn’t go see her, I would be sad and have a rare case of FOMO. Sadly, Britney was underwhelming. I’m fairly certain she sang one note and lip sync’d the rest. I didn’t like that the big screens weren’t showing her so I could only guess that I was actually seeing Britney way down on the stage and not just a really good impersonator. Ha ha. I will say she danced her derriere off and at least I can say I saw Britney in Vegas.
Sunday – Race Day
Finally, on Sunday, race day, there was a lot of resting. I learned my lesson last year and tried to do very little on Sunday before the 4 PM 10K race start. The S.O. went to watch some football while I read, grabbed a lite lunch, and napped until we headed down to catch the monorail at 2:30 PM.
The 10K start lacked much of the fanfare that the half and full marathoners receive but since this was the first year for the 10K that’s understandable. We didn’t get to see Kid Rock which was sucky but that’s what you get for running the smaller race I suppose. I knew this race was a lot smaller when I was assigned to corral one!
I did a mile warm up and then lined up with the 50 minute pacer and he and I chatted for a few before the race got started. He was really nice and I marveled at some of the folks starting right at the line. I do believe that some of these folks were not assigned to corral one and gave zero effs. They may have actually just gotten lost on the way to a casino. But, hey, that’s Vegas!
The horn sounded and I ran right next to the 50 minute pacer for the first mile. He said he was a little fast as we hit mile one with a 7:53. He was aiming for 8:03’s, but I felt really, really good. I had surged a bit in front of him and the pack by mile two and then I just kept going. Miles one until about the two and a quarter mark were slightly downhill, hence my initial pep. The rest of the race is a slight uphill. So yeah, uphill in the wind on the way back. Ouch.
The first three miles went by very quickly and I took advantage of the tailwind because I knew once we turned it was going to get tough. There were very strong gusts that came intermittently in both directions but the turn around was brutal toward the finish. 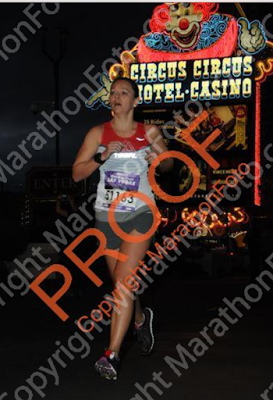 I can tell this photo is toward the end of the race because that’s when it got very dark out. I never gave up during this race and even with the wind I was determined to beat my current PR of 50:24. I even told the S.O. and Coach Jon before we got to Vegas that I was going to PR. Granted, my 10K PR isn’t as fast as my other PR’s but I’ll take what I can get!
I started really feeling my lungs and legs around mile five and told myself to hang on. I told myself that I wanted to keep hurting and to embrace the suck. And trust me, it felt like suck at this point. Ha!
As soon as I saw the finish line I knew I could beat my PR. I really wanted to go sub 50 and crossed the line just in front of the 50 minute pacer. We high fived and then I saw the S.O. waiting for me. He didn’t really race the 10K as he hasn’t been feeling so hot since his string of PR insanity.
My finish time was 50:07, a 17 second PR! Good enough for 4th in an age group of 616 women. That’s the best I’ve placed in a Rock N Roll I believe. Color me happy!
The S.O. and I had a fantastic trip to Vegas and will probably end up there again next year. We have become fans of the Rock N Roll series and while they are the 800 pound gorilla, they do put on a great race.

Even with the cold wind and light rain, I’d recommend Rock N Roll Las Vegas, and hell travelling for a 10K is worth it. There really isn’t anything quite like running the strip at night.

Thanks for reading and as a reminder, go hug your loved ones.