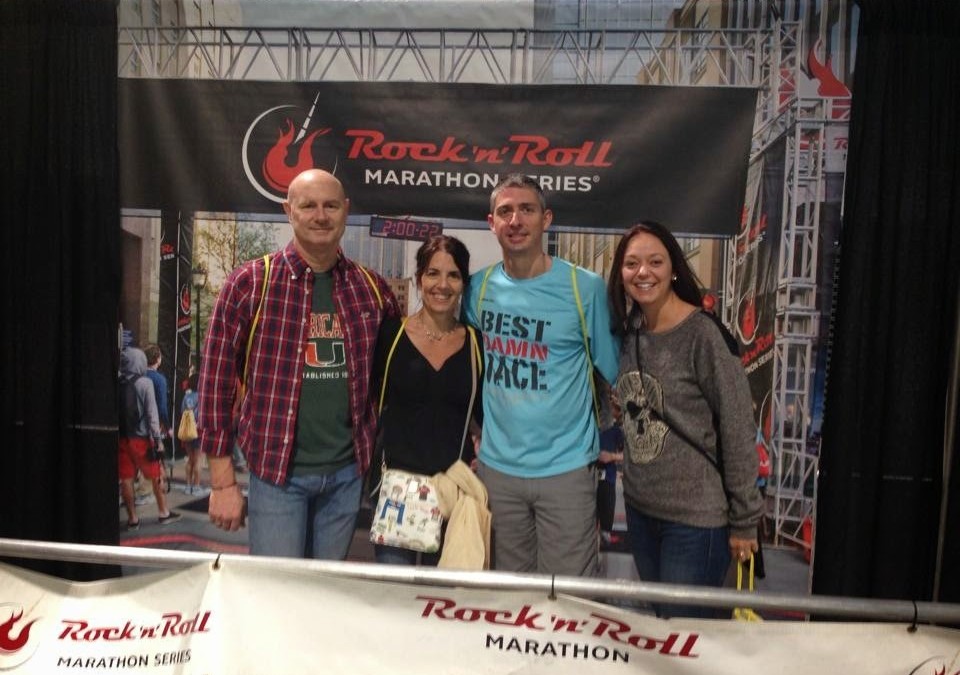 HELLO! I’m back and alive. Yes, I managed to leave Las Vegas fully intact, minus a few dollars, of course. Since this was more of a fun run, I’m doing a “travel” version of the race report. You don’t need a mile by mile breakdown. You do need, many photos of my fabulous Elvis costume. Ha!
The Good
Oh my gosh, so MUCH good. We arrived in Vegas on Friday and checked into our hotel, The Mirage. We chose it because it was listed as being at the finish line. As a friendly tip to those of you considering this race (which you SO should) The Mirage is where you cross the line that clocks off your 13.1 mile jaunt. It is not however, where you exit the finisher cute. That is about a mile farther walk down past Caesar’s. We really want to do this race again next year and will probably move down to Caesar’s.
After checking in we went to the Cirque du Soleil show “O”. It was fantastic but we were very tired from jet lag and learned another lesson on seeing a show the first night in Vegas. Filed that under: well duh.
﻿

On Saturday we went to packet pick up and getting there early is a MUST. We got through the line quickly and had the rest of the day to sightsee (me) and play poker (the S.O.). I walked a billion miles. I rode the roller coaster at New York New York and walked a bunch of shopping areas.  We had dinner with friends, and then I mosied all the way down to Serendipity 3 for the famous frozen hot chocolate. The S.O. wasn’t feeling great so I did some more night time exploring on my own. I saw Rod Stewart walk by and snapped a picture of the back of his head. I’m no Peter Parker.

I didn’t get back to the hotel until midnight and as the S.O. wasn’t feeling great he was already asleep. I booked a dolphin yoga class for 8:30 AM on Sunday morning and figured it was fine since I wasn’t “racing” the half. The dolphin yoga was super cool! It’s basically a yoga class taught surrounded by the dolphin pools. They seemed to enjoy staring at us and playing. I admit to stopping mid-posture just to stare. 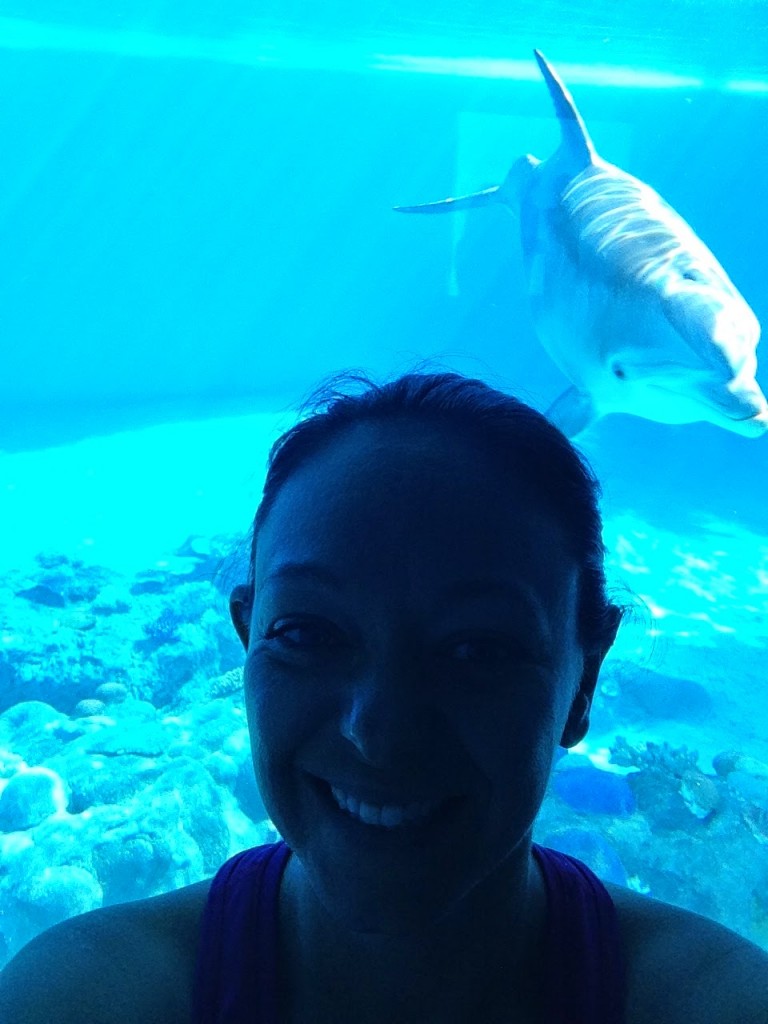 I had a very small (dumb B.o.B.) breakfast and then a banana and hung out in the room until it was time to load up on the race shuttles. Finally, at 2 PM we headed down to get on our shuttle that would take us to the race.
The pre-race concert, Mackelomore, was a blast! And the group Elvis shot was soooooo much fun! I must have taken a thousand photos with Elvis fans and foreigners. It. Was. Awesome.
﻿

The evening was getting cold and hanging out in my corral waiting for the start was not my favorite thing. I should have had gloves but I was determined not to distract from my Elvis costume. When I commit, I’m all in.
As the race started I was pumped. I ran along and realized I had to stop to pee. Dang it. I stopped at mile 2 and got in and out of a porta potty in a couple minutes. I was having a tough time holding the nine minute mile pace I had planned to run. It felt much faster. I carried on and just tried to keep it relatively easy. My miles one through 11 didn’t go over a 9:15, but they were all over the place. The aid stations were plentiful and well stocked. The volunteers were really energized and helpful.

The route itself is great! There are a few “hills” but nothing crazy. I heard lots of “Hey, Lady Elvis!” shouts along the way and ran with several different folks who wanted to chat. I also got to see my blogger friend Ken. He ran alongside me and we chatted for a bit, he was spectating and looked like he was loving it. I’ve seen Ken in Florida, Michigan (or was it Ohio?), and Nevada now. I heart blogger friends.

I wound up running with a woman named Tara for a long time. We both commented that we felt much faster than what we were running. We marveled at the famous lights of the strip and finally stopped chatting at around mile ten.

The Ugly
At mile 11 I was hurting. My legs felt really sore and my back was killing me. I told my new friend Tara to go ahead and she moved forward as we hit the 11.5 mile mark. I started realizing I really had to use the bathroom. Mile 12 was a painful 9:47 and I finally saw a porta potty. I quickly darted off the course and as a soon as I sat down (there was no hovering option at this point) I felt like I got hit by a ton of bricks. I felt nauseated and woozy. Uh-oh.
I forced myself to get out of the porta potty because I was afraid I’d pass out in there and not be found. I stopped and told a spectator I wasn’t feeling so hot. As I sat on the side of the course, she ran and got some nearby police. They asked if I needed medical and I considered it. Then, I realized I was wearing an Elvis suit and would be so sad if I didn’t finish this race. I told them no and stood up to walk that final mile. Someone handed me a bottled water and I walked the whole last mile. It was a 23 minute mile. Oof.
I hurt everywhere. And even though I crossed the finish line, I knew I wasn’t done. I had to walk the mile long chute to get my checked gear and then a mile back to The Mirage. I took my time and walked through Caesar’s instead of outside because I was freezing. The temps had dropped a lot and I was thankful for the jacket and gloves I had checked.
When I finally made it to my hotel room I was near tears. The S.O. had the total opposite experience and had a fabulous new PR. He was waiting for me and helped me get into the shower and start drinking Gatorade. I had to laugh at myself because I definitely did everything wrong prior to this race and I paid for it.

Final Thoughts
Even with the awful finish I had, I LOVE LOVE LOVE this race. I went into it a bit on the lackadaisical side and got a little cocky. I can run a half marathon, easy peasy, right? Notsomuch. I learned my lesson and would highly recommend this race to anyone! It was so well organized and running the strip at night is nothing short of breathtaking.
I’ll be back in Vegas for the half next year for sure. Hope to see you there and thank ya, thank ya very much! 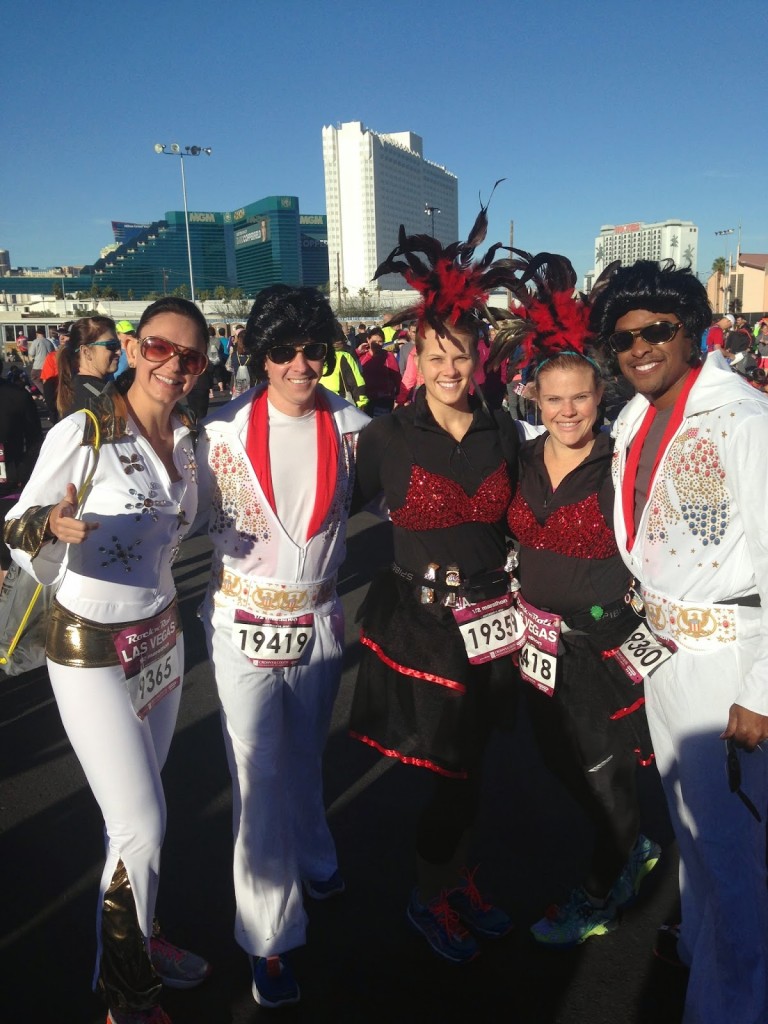 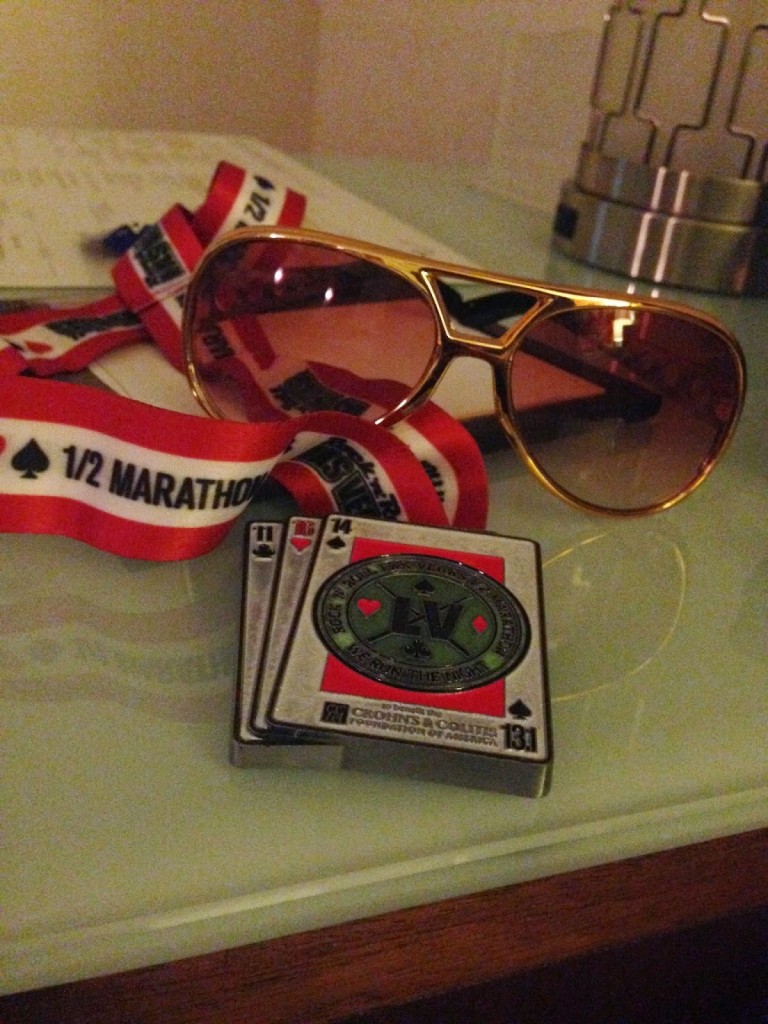