My weekend can be summed up in two words (that just so happen to rhyme): run and sun. Thank the lord I love both because I got my fill.

After hot yoga on Thursday I was sore in my t-rex arms but my legs were ready to go. I needed to run. I hadn’t officially signed up for a Gasparilla weekend race but it worked out since my friend V decided not to run the 5+3K. This was the first year for the 5+3K, sponsored by Fifth Third Bank, get it? Five plus three. Clever, clever.

Anyway, the Gasparilla race weekend had four events: a 15K, a 5K, a half marathon, and the 5+3K. You could run any of the races and some chose to do 3 as a challenge or the full Monty – all 4. I call those people crazy. (Again, I won’t knock them too much since I can see me thinking this is a good idea next year…)

Since so many of my running group peeps were racing I decided to head out on both Saturday and Sunday. I watched the races on both days, except for the 5+3K that I ran. I can’t believe the volume of runners at the 5K on Saturday. There were 12,200 runners and walkers for the 5K. It was amazing, as evidenced by the photo below. I believe it’s safe to say that the running boom is upon us. Let it be noted that I was running before it was cool to run. Just sayin.

Both days were gorgeous for being outside. They were warm but it was worth it to see and cheer all of my friends on. The Lazy Runner came out for the 5K and he and Caribbean Steve posed for this shot. 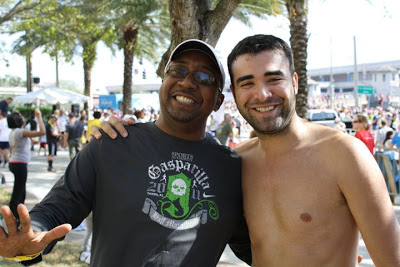 And my little P-Funk ran a great race during her 15K. I love me some P-Funk! 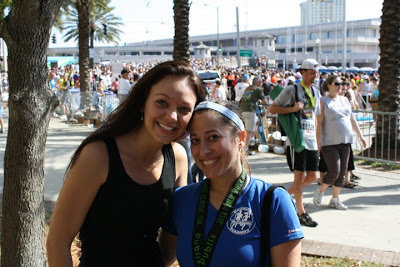 As for my 5+3K, it went well. I wasn’t really “racing” per se, but I didn’t exactly jog it either. My legs felt pretty good considering I hadn’t used them in a full week. I held 8:30’s for the race and enjoyed running this new distance. It was a PR since I’ve never even heard of an 8K before this. I’ll take it!
I must send congrats out to LaWa (first half marathon!), Coach EK (amazing half marathon!), D from Women’s Running (three!), Mel (first 8K!), Speedy Josh (won the 8K and place in the challenge!), P-Funk (as noted above!), Caribbean Steve (my BBF kicked half marathon butt!), Hollster (also half marathon PR!), Navy Steve (4 race challenge!), CaySee (racing fool!), Lazy Runner (the 5K maniac!), The Lawyer (crushed his half!), Laura T (half PR!), Liz (great half performance!), and Chris-Brian (great half as well!). I apologize to anyone I missed because there were just a ton of you racing. I did however cheer my fool head off at anyone and everyone I saw.
For some weird reason today, I feel like running hills. They haven’t seen me in a while. I’m kind of hoping they take it easy on me…
What did you all do this weekend?