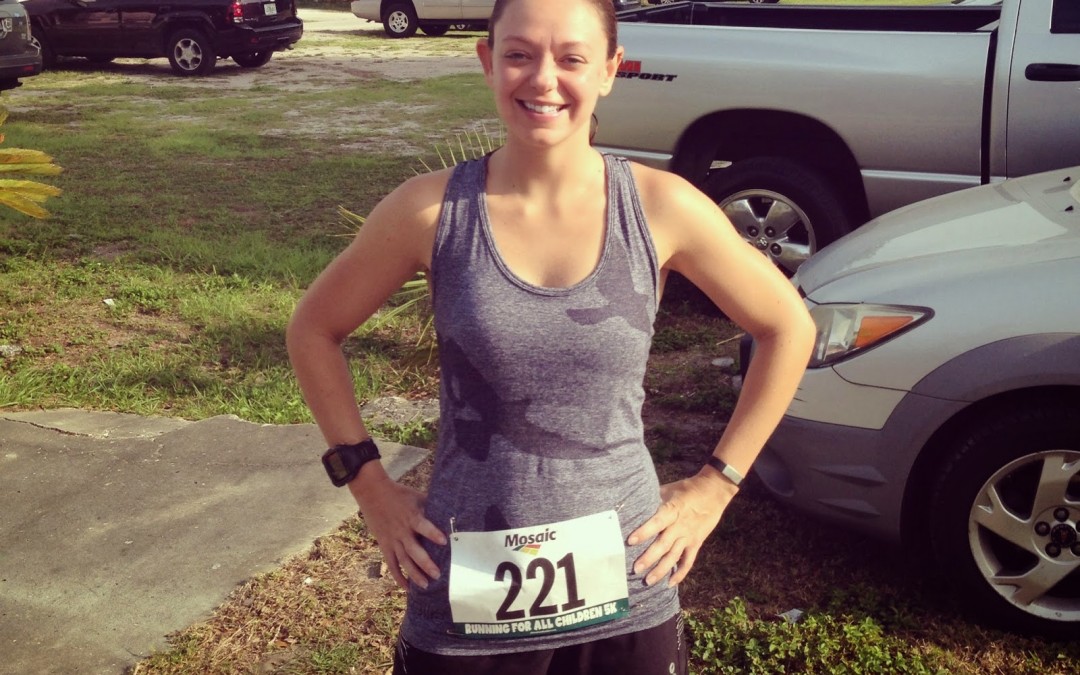 The S.O. and I signed up for this race, which was held last Saturday, because it was right down the street from us and we knew it’d be on the small side. Don’t get me wrong, I love knowing where I fit in with the bigger, more competitive races (I get smoked), but it’s always nice to run a small one and hope for hardware.
I basically snuck this 5K in without telling my coach until a couple of weeks before but I promised him I’d run the 2.4 miles from our house to the race as a warm up and I’d run a cool down after.
The S.O. and I woke up later than normal for a 5K since we didn’t have a long drive and it was awesome. I headed out the door to run to the race start while the S.O. drove over. It was nice to get in the warm up and I took my time running down there.

After chatting with a few other locals, I lined up for the start. The 5K and 10K started together and it was hard to tell who was running what because there was only a small strip of color indicating the event on the bib. I knew the local runner who would win the women’s 5K so I stood a bit behind her. The S.O. was gunning for a possible podium spot so he too was up in the front.

The national anthem was sung and the race started right on time.

I took off a bit faster than I should have and clocked a 7:12 the first mile. Ouch. As we neared the first turn around of this course I saw a lot of women in front of me.

I saw the IronGoof walking next to the course, coaching some of his runners, and told him I was struggling. I had a bad side stitch. He told me to slow down and it was the smartest thing I’d ever heard. Why didn’t I think of that? Genius! I hit mile two and clocked a 7:37. Oh hi positive splits!

As I got toward the 2.25 mile mark I started seeing the front runners coming back toward me. I didn’t see the S.O. and started to worry. As I ran forward a bit and continued to slow because I basically gave up at this point, I saw the S.O. walking. When we reached each other, I stopped to see what was going on with him. Sadly, he and another guy gunning for first place missed the 5K turn and ran about a quarter too far. Total bummer.

The turn around that sent 5K runners back to the start/finish area was right at a water stop and no one was yelling “5K turn!” at that point and both guys missed it. The woman behind them in the race yelled to alert them but there was a heavy wind and neither heard it. The S.O. was pretty sad but understood that this stuff happens. I told him that it’s a blessing to all that I’m not faster because I would 100% lead people the wrong way if I were ever in the front of a race. Haha.

My mile three was an 8:15 and I slogged it into the finish line with a final time of 23:53. Not a bad time, but definitely not a smart race on my part since I mentally gave early on. I just didn’t have a lot of oomph on Saturday. NBD.

The race itself was great. It was well organized and that’s hard to do with a first time event. (Been there, done that.) There were a lot of volunteers and even with the 5K turn snafu, I’d say it went well. The post race food looked pretty awesome (breakfast pizza!). This race also gave out small medals which is always a nice touch, especially for first timers. The proceeds went to All Children’s Hospital Guild-Seminole/Largo Branch.

After the race, the S.O. and I skedaddled to get breakfast at a nearby diner and eat at least 10,000 calories since we burned that many right?

I was pleasantly surprised this morning when I got an email informing me that I had placed 3rd Overall. All those fast ladies in front of me must have been hauling butt in the 10K.  The RD offered to mail me my award, and that’s pretty damn cool.

Thanks for reading and thanks for the awesome and helpful comments to yesterday’s post. I like you guys.