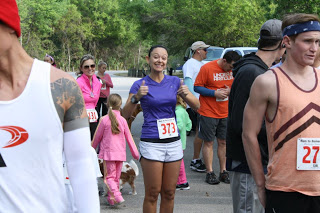 Yesterday I had my first run in six weeks. I do not recommend taking six weeks off of running but if you have to, you absolutely can start again. Be warned: it hurts.
On Saturday morning I got up to chilly temps and headed out to the Run to Remember Alexis Saunders 5K at Al Lopez Park. I had one goal: finish the 5K without walking. It seemed like a great plan at the time.
This race was arguably one of the smallest races I’ve ever run. It coincided with the Humane Society’s Bark in the Park event that I had raised funds for. It was really a win-win-win for me: a great cause, running, and puppies.
The 5K didn’t start until 9 AM and I got there entirely too early due to my excitement at running. I had some time to peruse the expo that was starting to form for the Bark in the Park event. This booth, of course, caught my eye.
It neared race start time and I lined up with no real idea of how I’d feel. The 5K began and as per usual, we were off and I may have started out a tad too fast. I can’t help it. I get caught up in the excitement at the start of almost every race. I looked down at my Garmin and saw an eight minute something and thought, this is a bad, bad idea. I forced myself to slow down.
As I hit mile one I was much more comfortable at a nine minute mile pace. However, this nine minute mile pace felt really fast. Six weeks off, remember? I fell in step behind a dad and his eleven-year-old daughter and used them as rabbits, even though I had a feeling they’d pull away.
I chugged along at my nine minute mile and paid attention to my body. My lungs hurt. My legs hurt. My ego hurt. But, I was running. And at that I smiled.
Close to the 2.5 mile mark a few guys were talking about races. I took the opportunity to chat them up about my upcoming 5K (ABC – Always Be Closing). One of the gentlemen fell in step with me and we chatted about our 5K times. He told me this was his first actual race and he wanted to hit a 28. I told him we could stick together and get that PR for him.
I admit that I was struggling near the end. I used my buddy, Todd, as a way to push myself and try to get him in by 28 minutes. I find that helping someone always helps me. We arrived at the three mile mark and I told Todd it was time to push it. He left me in the dust. I had no pick up. It was hysterical. Oh well.
We finished at 28 and some change and Todd let me know he actually needed under 28 to PR. Well damn. Had I known that I would have sent him on his way cause a 28 minute 5K is my new PR. Heh.
After the race I had time to head back over to Disco Donuts and celebrate my first run. They were the most delicious little donuts I’ve ever eaten. It was still chilly out so these warm, tiny, fried donuts were the perfect post run treat.
I had a great time walking around Bark in the Park with my fundraising “pack.” We wound up coming in third place and raised over $2,000. Yay!
I’d consider this a successful first run back. Even though I currently feel like I ran a 1/2 marathon (hamstrings: ow ow ow), it was so worth it to make my first run back more of an event than just a run around my ‘hood.
Have you ever taken an extended break from running? How long did it take you to come back?