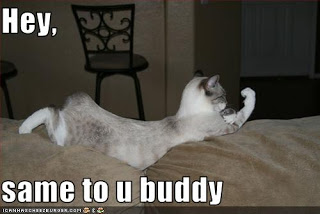 So here it is. An entire post on running. I know you all are thrilled. Since coming back from this fake injury of mine I’ve been trying to take it easy on my runs. This hasn’t been too difficult because running totally sucks my butt right now. Thank goodness my injury decided to be fake right before the hottest few months of the year! *That’s sarcasm in case you missed it.
I’m content with my five milers and short runs but after Sunday’s long run of seven miles, I am feeling a bit nervous about that half mary I’ll need to complete in Augusta. With only 6 weeks to go, I’m wondering how I’m going to get comfortable with 13.1 again. As much as I don’t want to walk during the 70.3, it may just happen.
On Sunday I admit that I was tired from a wedding I attended on Saturday and it was a later start than I like so I’m hopeful those are factors that played into the run feeling like poop. I haven’t checked my Garmin for distance that many times since my first marathon. I was doing the “chicken wing” arm like nobody’s business. (This is what we call it when one repeatedly looks at their watch.)
As I ran I kept saying to myself, “You’ve run six marathons fool! You can run seven damn miles!” That helped for a bit, but man was I struggling. As a huge proponent of positive inner monologue, it’s not always easy to do. I did get a break from my thoughts when some dude driving a have-some-candy-little-kid-van laid on his horn and waved at me while he drove by. Uh, sure dude. I am totally into you based on your car horn. And creepy van. What the hell is the point of that? Why honk at someone while they are running? I just don’t understand it.

Anyway, I gave it my all and when that Garmin hit seven I almost cheered for joy. When I saw my friend Jess coming out to meet me with Nuun and her fantastic boxer doggie, Barney, I definitely cheered. She was like a piece of heaven.
I find it so strange that right now the thing I’m most concerned about is the run. A year ago I would have told you it’d be the bike all the way. Granted, I’m still fairly new on the bike but I have a lot more confidence on it then I did back then. I never imagined I’d be in this spot. Injuries can suck it.
In emailing with my coach I told him I was moving slow and he told me not to worry because it’s summer and it’s hot and I should be running that pace. I know what I need to do and I know being smart is the most important thing I’ve learned through all of this. I’m going to keep at it. And try not to get too crazy with paces and distances and blah blah blah. I’ll be at Augusta, toeing that start line, regardless.
How hard was it for you coming back from injury? Any tips on getting through it?