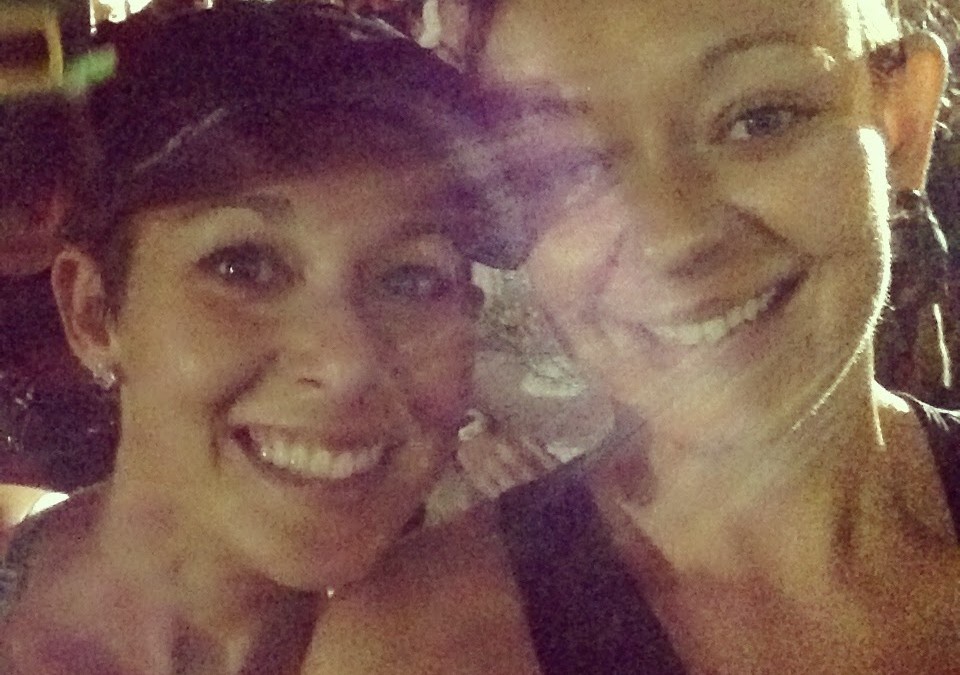 As part of my training plan for HITS Ocala 70.3, I typically have a long run on the weekend. I have been very cautious while increasing these longs runs and slowly bringing my run mileage back up since the Jacksonville Marathon and my little two week break from running.
I had decided to run the Sarasota Half Marathon as a training run with the Tampa Bay Bloggers* as well as a bunch of other friends. I love the Sarasota Half Marathon. I love the course. I love the medal. I love the pre and post race party. It’s just an overall great race. ﻿
Caitlyn, the S.O., and I carpooled to Sarasota really early on Sunday morning since we couldn’t find a hotel within our price range and we were looking after many of the hotels had been scooped up. Procrastination at it’s finest. The drive took about an hour and since this was “just a training run” I decided to eat gluten free waffles for breakfast and have a giant coffee on the drive over. I would not normally do this if I were “racing.”
As soon as we arrived I jumped out of the car to head to the porta potties. And by as soon as we arrived, I mean before we even made it into the parking lot from the row of traffic.
I soon saw Caitlyn and my mommy-to-friend Jess and we snapped a pic before I headed to the porta potty line once more. My stomach sure was acting goofy for a “training run.”
Jess headed off to the relay start, while Caitlyn and I lined up with Brad in the 13 minutes per mile area. I wanted to scooch up a tad but it was so packed by this point we all just decided we’d start where we were and make our way forward as we ran. Not a big deal. Of course, as we waited for the start, I realized I had to go. Again. Sigh. I’ll just stop during my “training run.” NBD.
[National Anthem. Gun. Cheers.]
Brad and I stayed together for the first mile that brings you up and over the Ringling Bridge. Yes, THAT Ringling. 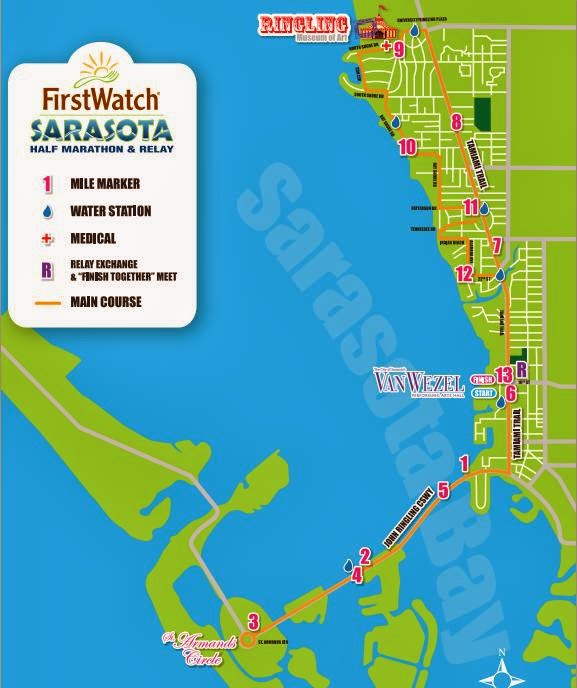 Brad and I passed a lot of people considering where we lined up and I definitely thought, “Hey Beth, you’re running a bit fast for a training run,” but I felt compelled to run around folks and at least catch up to the two hour pace group. My standard half marathon goal is to just finish under two hours.
As we got to mile three and the turn around at the famous St. Armand’s Circle, I told Brad to go on. He seemed zippy and looked good. I told him I wanted to cruise for a bit and he said ok and sped off. I settled back into my pace and thought about when I’d see the next porta potty. I got back over the bridge and wondered why I felt so good.
Miles One through Five: 8:48, 8:30, 8:17, 8:04, 8:21
As I hit mile six I saw a porta potty set back off the course in the parking lot. I decided I was running too well to add in that much extra time. I think it was at about this point in the half that I chose not to kill myself but also not to see the number nine on my Garmin. I had to use the bathroom, but otherwise, I felt great. The weather was cool and the course is just stunning.
I finally saw an open porta potty at mile seven and there was no line. I wanted to be sure I was *ahem* done so I didn’t exactly rush but I hurried as best I could. I am always ready to get off this stretch of the course because while there’s lots to look at, I get tired of this straightaway. I played the catch the person wearing insert color shirt here game and tried to pick people off as I went.
Miles Six though Ten: 8:03, 9:09, 8:17, 8:12, 8:01
By mile ten, the course is in some neighborhoods and there are more turns than I remembered from last year. However, I think this is because I was starting to feel more labored. I knew I was running faster than I planned and I knew Coach Steve would want me to negative split or it’d appear I went out too fast.
At around mile 11 I saw Brad’s shirt and decided to reel him in. This helped me pick up the pace and aim for a target. I think I got to him close to 11.5 or over. I was pushing hard to catch him and as I got next to him I realized I couldn’t talk. He cheerfully said something along the lines of you said you were taking it easy or something, I have no idea actually. He sounded great and I felt like a quickly deflating balloon. I groaned at him, “I caaaan’t talk,” and kept running. I must have looked like a mad-woman.
I finally hit mile 12 and some young guy running barefoot tried to race me. Or stay with me. I dunno, one of the two, but it helped me keep going. His feet slapping on the ground made me want to run faster, so I did. I saw the final turn and heard the S.O. (he did the relay) cheering and gunned it to the chute.
Miles Eleven through Thirteen Point Two Seven (per the Garmin): 8:06, 8:00, 7:54, 7:43
Finish Time: 1:49:50
I did feel dehydrated as I grabbed my medal so I headed to the med tent for some Gatorade. They gave me a wet towel and I was on my way. The numerous potty stops and extra caffeine probably didn’t help my cause that morning but I felt much better after I got some Gatorade in me.
Brad said I was on mission at the end so he let me go. He came in a touch after I did and we found all of our friends to celebrate. The S.O. and his partner, Ben, won the relay division and were pretty stoked to get sweet glass awards.

Final Thoughts
I am glad I pushed this race. I have been feeling the itch to race and I think I played it smart. I didn’t gun it out of the gate and I think I managed the negative split idea really well. On a scale of one to ten as far as effort, I feel like this was an eight. I probably should have stayed in the six or seven range but I couldn’t help myself. The legs said, “GO!” so I did.

*I was given a free entry in exchange for a blog post. My opinions are my own.