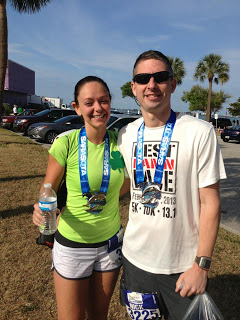 Sarasota put on a great race and we really enjoyed it. These local races just keep getting better and better and I can’t wait to do more. Oh and for the record my time was 2:28:09. Thanks again to my blogger friends! Congrats to all the runners and thanks to the volunteers!
Happy Monday! Who raced this weekend? Who drank too much green beer?