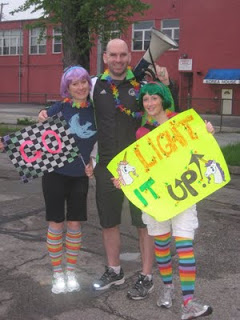 Spectating is an often overlooked part of athletics. With the exception of those guys in various sporting event stands who catch the wrong ball or propose on the Jumbo-tron, it’s rarely highlighted. It’s a way for fans to root for their favorite team or player. It’s also a way that our loved ones can cheer us on and be there when we finish our races. Beaming with pride they bestow all of the congratulatory back slaps we love. This is one of the reasons that the Boston tragedy affected all of us so much. Our spectators are often THE most important people in our lives.
Now, on any given race day, Spike, also known as my bestie Red’s other half, if he’s not racing, can be found spectating his fool face off. I have been fortunate enough to have him spectate at least two of my races. And for some reason, he always ends up with a bull horn.
I remember during the Cleveland Half Marathon, he was yelling to people running around me, “That’s my friend Beth! Go catch her!” Of course, it was hilarious and gave quite a few people a reason to smile so late in the race when everyone usually needs a little pick me up.
In addition to his crazy, random “motivational” yelled messages, he often goes for off beat signage. For example, when he spectated at my triathlon, he made a sign that read: “I already know how to pee my pants. Teach me how to swim!” And since he couldn’t travel to Florida with a bull horn, he improvised by using an orange cone. The man loves to spectate. In fact, he’s made it an art form.
Many of us have been spectators for our friends and family and it’s hard to think that last Monday, all those folks wanted to do was cheer their favorite runner on. Spike has run Boston and Red has been there to cheer him on. I can’t even stomach the thought of them being out there last week.
So, instead of thinking about the terrible what if’s, I’m going to think about how, in the face of those who wish to hurt us as Americans, Spike and Red chose to spectate at the Lansing Marathon last weekend. They did it in true Spike spectating art form fashion.
If you are in need of a smile or a chuckle, I send you over to Red’s blog. It’s called Caution: Redhead Running but today, it could be called Spectating by Spike.