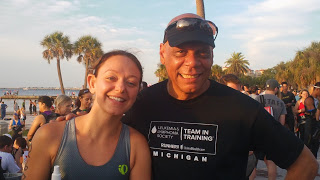 I made a final decision on Saturday after walking around the expo that I would take a DNF on Sunday. My leg was grouchy all day from walking and I just did not feel that it was going to make it through 6.2 miles no matter what pace I ran. I also didn’t feel like walking 6.2 miles. It was one of the tougher decisions I’ve made with regards to this sport.
On Sunday morning when my alarm went off I felt ok. I was a little grumpy and looked at my running shoes, still deep down debating if I should just bring them. I realized that if I did bring them the desire to run would probably override my desire to not get re-injured so I left them at home in the solid company of Lloyd.
My pre-race mood improved a little when I saw P-Funk, a bunch of other friends, and then this man right here:

Yay! It’s TNT Coach Ken! Ken is like a giant ball of fun. His laugh is infectious and his sense of humor is outstanding. He is one of the best people I have met through blogging. Love him! (And I got to meet his other half and guess what? She’s cool as shit too!)
As I waited…and waited…and waited for my 8:25 start time I was preoccupied with thoughts of my dumb leg injury and how I wanted to run. It’s amazing how much bullshit can effect one’s mental game.
My age group of women finally got the call to line up for the water start and new swim course just as we heard them announce that the first male pro was coming in to finish the run. It was rude. I hadn’t even freakin started! Heh.
When the horn went off for the swim start I took off like a maniac. I am pretty sure that first 100 meters was out of control. I reigned it in and got to about the 400 meter mark and just started thinking those negative race thoughts that occur when one is not quite in the game.
“F@ck it. I’ll just swim back now.”
“Why do I feel like poop?”
“How many effing buoys are there?”
But then I told myself to man up and get going. And I did. For the most part. Honestly, I just really didn’t enjoy this swim. I hated that when we got to another yellow buoy we had to turn left, AKA farther away from the swim exit. I caught a lot of the yellow cap group in front of me but I just never seemed to find a good rhythm.
Swim time 1.5 KM: 30:33

As I gratefully exited the swim, with a new course that now meant climbing up some stairs out of the water, I started feeling better. I easily found my bike in transition and since I knew I wasn’t running I didn’t really push through transition as fast as I could have. I know I probably should have practiced this but I just didn’t feel like killing myself to get out of the sausage casing known as the wetsuit.
T1: 3:10
It was amazing to get on the bike, clip in, and go without even a thought. In races past I’ve been so nervous just getting on the bike. I was smiling like a fool by mile two. By mile five I was actually having fun. I was riding around a guy who I noticed didn’t have clips OR toe cages on his bike. And he was staying with me. At one point I said to him, “Hey! You know how fast you would be if you got clips?” He laughed and said he didn’t like them and asked, “Can I have some of your water?” Say what? Apparently he forgot his water but was relieved when I told him there would be water on the course and he could have some of mine if he needed it. He said he was good and happy there was water ahead.
At this point I was cruising right along and eating my Gu Chomps and just really riding as hard as I could. All the while, having fun and enjoying myself. I admit I was thankful for not having to run because it was getting hot as balls out there. Yes, I would have dealt with the heat if I could have, but honestly, it wasn’t too bad to know that once I was off the bike I was done.
I saw “No Clips” get his water and when he caught back up to me on a turn he asked how fast we were going. When I told him 20 mph, he agreed that he probably should get clips. It was funny! I enjoy these moments during a race. No sense in not making friends when you can.
As I got toward the finish I realized that I hadn’t been counting down the miles like I had last year and I actually smiled for the photogs and even though there was some skidding of my cleat on the cobblestone dismount area, I didn’t fall and I had a great ride. Notice that someone finally got comfortable in the “drops.” Seriously? Who am I? 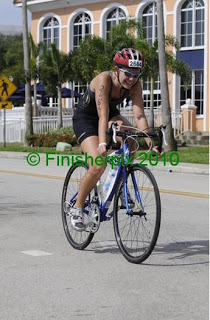 When I saw my time, I looked back at last year’s race and realized I had a 15 minute PR on the bike. That’s huge for me! I’m not a speed demon by any stretch of the imagination but man does it show how the practice does pay off.
Bike time 40 KM: 1:23:57
When I got Dolly re-racked I found an official taking a chip from another poor soul who was DNF-ing but he was a lot worse for the wear than I was. He had taken a spill and had some serious road rash. Poor guy. At least my DNF was predetermined.
The post race celebration was killer. It was probably one of the most fun post race celebrations I’ve ever had. Watching the awards was awesome and a few friends got in the top ten age of their age groups. I think that sitting directly in front of the beer truck was an excellent decision even though I was probably dehydrated and had a head ache by 4 PM.
Congrats to those who raced and thanks to those who spectated. Shout out to Lazy Runner on his first step into the triathlon world with a relay. He killed that 10K! And very special shout out to Chris-Brian who completed his first oly. He’s been a huge help riding with me during the week and I’m very proud of him.
A few more pics…. 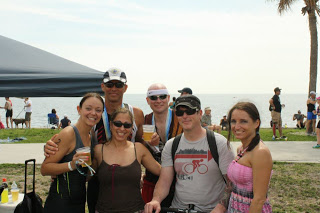 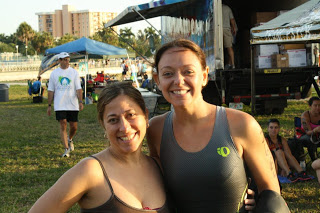 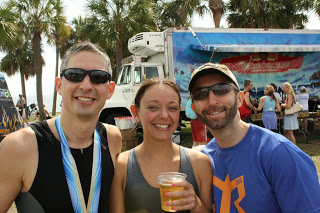 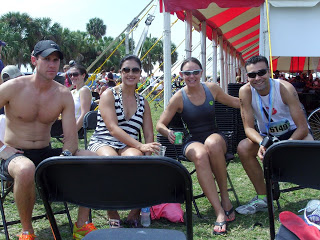