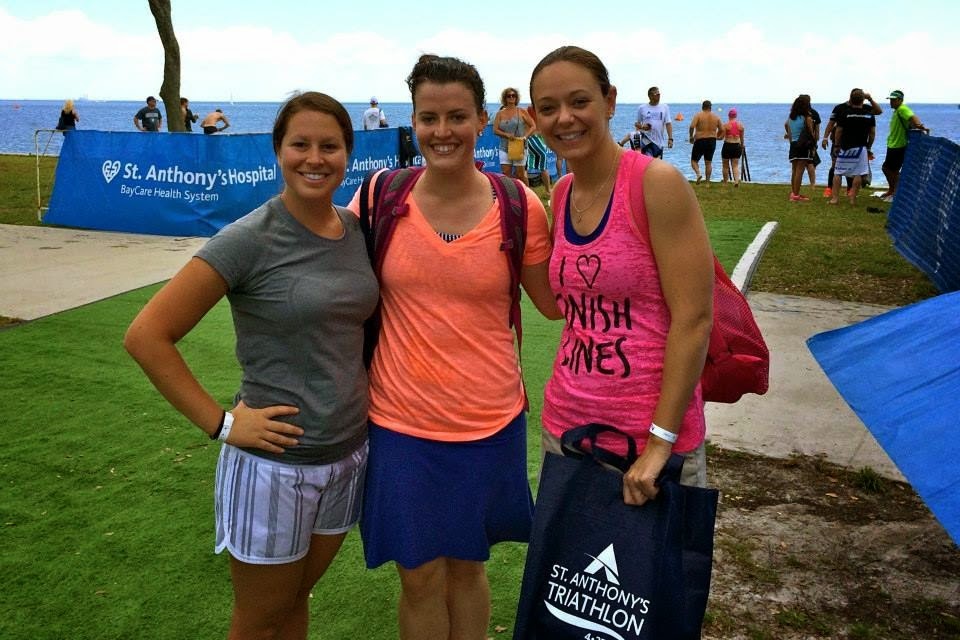 I’m very happy to report that I finally got my shit together for this year’s St. Anthony’s Olympic Triathlon! I managed to finish the whole thing without busting my ass, DNF’ing, or crawling on the bike. Well, my version of non-crawling anyway.
St. Anthony’s is one of the biggest triathlons in the Southeast and it’s competitive featuring lots of elites and pros! It’s a great race every year and it’s like a big, ol’ triathlon party.
The day before the race, Meghan and I met up to head to the expo, rack our bikes, do a pre-race swim, and drive the bike course. The S.O. was manning the Best Damn booth. This was Meghan’s first St. Anthony’s and she wanted to see the 4,000 turns on the bike course. This helped me as well since I hadn’t ridden the course since 2012.
We met up with Genna who was racing her first ever triathlon and raising money for Team in Training.

I got to the finish line and was really happy with my run! I thought I had run faster because I think I started my watch late but I was happy with the official time.
Run Time: 50:48 (8:12 avg/12th in AG)
Overall Time: 2:46:27
AG: 14/57
Overall Place: 639/1692
Both Meghan’s, Coach Steve, the S.O. and Genna did great! Meghan got 5th in her age group and had THE fastest swim in her age group! Genna completed her first triathlon and Coach Steve kicked ass only a week after running an impressive Boston Marathon. The S.O. who just gets faster all the time, had a phenomenal day racing a 2:17 with a bike split averaging 22.7 MPH and placing 11th in his AG!
As far as my race goes, I did my best and I get stronger every year. There’s always room for improvement, but I PR’d my bike yet again and I definitely got faster on those transitions, even if I did make a tiny sandwich. Haha.
As a final note, I got lots of compliments on my Smash kit. I had some chafing from it at Hits 70.3 but I think that’s due to the monsoon I ran in because I had no issues at St. Anthony’s. It was super comfortable and I love, love, love all the colors!
Thanks for reading! Did you race this weekend? How’d it go?