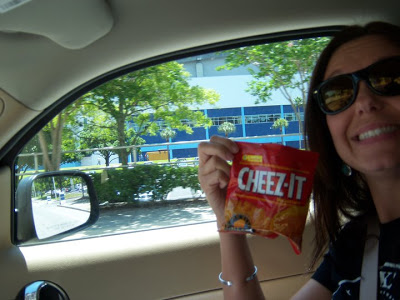 I have so many thoughts and feelings on this race that I am afraid this post is going to be a long one. I typically try to keep them short so I apologize that this is a thousand page epic novel. Without the Hobbits.

Prologue:
The day before the race me and some tri buds headed over to check our bikes into transition, grab our race numbers and chips, hit up the expo, and drive the bike course. During the drive to St. Pete I texted and spoke with Red. She is amazing at calming my nerves and making me laugh. I texted her that I was super nervous and wanted to cry a little. She responded with “There’s no crying in try-ing! Lol!” And that made me laugh.

Having never ridden more than 21 miles I knew I wasn’t ready for this 25 mile bike ride that lay before me. It’s my own fault and I’ve learned from that under-training mistake. More on that later…

We drove the bike course for what felt like an eternity and I was panicked by the sharp turns, u-turns, and speed bumps I’d have to ride over on race day. And let’s be honest, I was just panicked about the race in general. But at least during the ride I had some pre-race fuel to calm my nerves (a little).

After we drove the course we headed to the expo and race check in. We cruised the expo and joked about the wetsuits not getting sold since we certainly won’t going to be wearing them on race day. I took this opportunity to do some more panicking and try on some goggles. 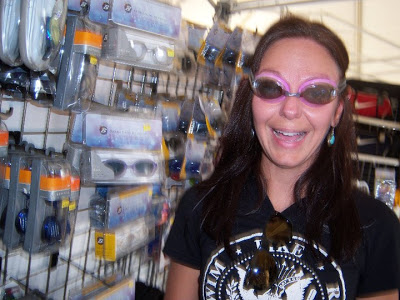 This is a good look for me, don’t you think?

We then racked our bikes and I tried to remember where mine was located amongst the sea of bicycles. Seeing all them only intensified my nerves and I felt like such a newbie out there with all of the tri bikes that made Dolly look a little like the Coat of Many Colors.

Per tradition, we all jumped into the water for a pre-race day dip. I felt much, much better after this little swim and was glad I did it, even though I didn’t really want to mess up my hair. Haha. As soon as I got home that evening I had to quickly shower and head to my sister’s for a housewarming. I felt bad for not being able to stay longer and the food she had set out was like “I’ll take foods you can’t eat before a triathlon for $500, Alex.” It all looked delicious. Ok, so maybe I sampled a chip or two…

With the triathlon, it doesn’t matter when your wave starts, you have to be there to get into transition before it closes. Thus, at the very early time of 3:40 AM, my alarm went off. I slept surprisingly well and was out the door and headed to St Pete again by 4:30ish.

As soon as I got out the car the first thing I noticed was the wind. HOLY CRAP! Who plans a damn tri during a Cat 5 hurricane? It was bananas. The weather was polar opposite of it was the day before. It was windy as shit and cold. What the hell?

Me and my fellow racers were told that the swim was shortened and moved over to allow a beach entrance and exit. I think normally the swim exits on steps a bit closer to transition. This year the swim was going to be 1,000 meters as opposed to 1,500 meters. And the transition to the bike area was about a quarter mile or a little more. All sidewalk.

I got capped and goggled up and chatted with some friends. I had met a new tri buddy the week before at a group swim and we lined up together. We were joking and laughing up until the race started. I have a feeling she’ll be in more of my posts cause I enjoy her company so. I’ll call her Little Bit, since that’s what she told me her nickname was when I told her mine was B.o.B.

Since the swim was shortened, I was feeling pretty good. I kept reminding myself that I needed to get in there and go since I was certainly not going to be going fast on the bike. And that’s what I did. I swam as fast as I could and hoped that I wasn’t in the back of the pack. Fortunately, the wind had died down and it warmed up a bit (it would get much hotter though, trust me). The water was a little choppy, but not anywhere near some of the OWSs (Open Water Swims) I had trained in. Take note other newbies: the rough OWS’s will help you during a race!

There were a few bumps of hands and feet and a few gulps of saltwater, but no there was no panicking and in general, I felt good.

I got out of the water and ran. I hit that sidewalk and ran as fast as I could to transition. It was not a short run like the other races I’ve done. We joked that this race was a swim-run-bike-run. 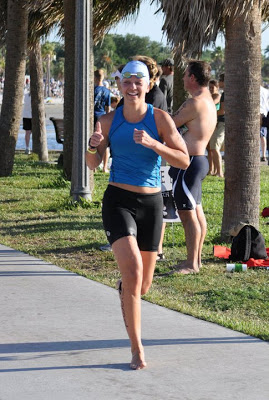 As I got to my bike (thank GOD I remembered where it was) I noticed a lot of bikes still racked and felt good that I had the small lead that I did. “I won’t come in last!” I thought.

I was pretty quick getting my shoes, helmet, and sunglasses on. And this is pretty much where everything with the bike went south.

Dolly and I headed to the mounting area (sounds dirty, hee hee!). I went to hop on and noticed the chain had come off the back cassette (basically the back sprocket thingy on the bike). I had zero idea how to put it back on. I mean, not a clue. I pulled at it from every direction as bikers zoomed passed me. I started thinking that this was it for me and St. Anthony’s. I would have to tell you all how I was such an idiot and didn’t learn proper bike maintenance and had to quit this race.

But, fortunately, a kind soul stopped to help me. She yelled, “Hey athlete!” I ran up to her and she put that chain back on in about 30 seconds and jokingly told me thanks for the lead. I wish I had gotten her race number to thank her because stopping to help me added time to her own race. *Note to self: Learn basic bike maintenance and how to change a flat cause I now know that this crap happens.

“Sweet relief!” I thought, “back in the game.” Until…I clipped in my right foot as I always do and as I lifted myself onto the seat my shorts got caught on the saddle and I lost my balance, over corrected, and yep, fell right over. In front of all sorts of spectators. My worst race fear had just happened. And you know what? It wasn’t that bad. Of couse, I was frustrated, but I was so happy that my chain was back on I yelled to concerned spectators, “I’m ok!” and finally got pedaling.

And then I got going. I pedaled about a mile when I shifted and the damn gears got stuck. Or something. I’m not quite sure what happened here. I couldn’t pedal forward. I could only back pedal and as I tried to shift and re-shift I still couldn’t pedal forward. Aggggh! I pulled off to a parking lot off of the race course and did a few circles to get right. I finally did something that got me going again, but I of course, kept losing more time on the ride. Sigh.

Finally, back on the bike course and riding as fast as I could, I knew I was not trained for this distance. The furthest I had gone was 21 miles and winging 25 was not going to be easy. The miles ticked by and I laughed as I got passed over and over. Ah, what the hell, I thought. I’ll finish this race and know better than to do this again. Me and Dolly shall become one.

Pedaling along I saw many sights of St Pete and was happy when Little Bit came up behind me. We joked about paying for this lovely bike tour and that people passing us were not getting their money’s worth. Little Bit was strong on the bike and I watched her fade into the distance ahead of me.

As I mentioned before there were some sharp turns, u-turns, and a few speed bumps. I handled each one with caution and noticed that I was getting tired by mile 15. The miles continued to tick by slowly and I have never looked forward to running more in my entire life. At mile 20, I thought it would never end. I got passed by three of my lady friends who started before me and this is always humbling. First Little J zoomed by and shouted encouragement, then Cay-See did the same, followed by Speedy Jess who called me the prettiest cyclist out there. I’ll take it!

When I finally saw the cobblestones, I knew I had done it. I rode 25 miles for the first time ever. During a race. LOL! 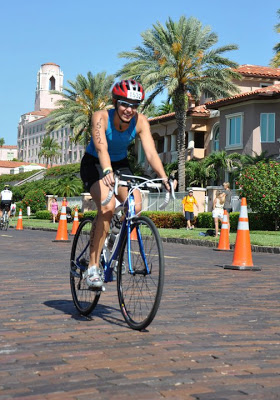 I was so happy to be putting on my running shoes that I’m certain I smiled throughout this entire transition. I gobbled up some Shot Bloks and drank some water and headed out to run. Of course, as I got to the run entrance I noticed I had forgotten to put on my race number and had to run back to get it. FAIL. Oh well, Little J (who got 2nd in her AG cause she’s that bad ass), said she did that once and it taught her never to do it again.

Ah, the run. My happy place. Sort of. I say sort of, because it was HOT by the time I got off the longest bike ride ever. I told myself I could walk through the water stops if needed and was completely grateful to the folks outside of their homes with hoses. They squirted runners down as we passed and it was a fun touch for the end of this race. In my head I was whining until I saw an athlete with a handicap and limited ability to run and I felt like a jerk. She was out here with a disability and she was looking strong. I felt happy for her to be kicking butt and reminded myself how fortunate I was to just be able to race. It gave me the pep I needed to finish that final few miles.

The Finish, Stats, and final thoughts (AKA damn this crap is long):

I crossed the finish to see my friends from the BRA and managed a big smile. I was done. I was tired and I was so glad it was over. I walked over to get my medal, take my finisher’s photo and then headed to our tent to pass out.

I felt queasy and dirty (thanks to that bike chain incident and mucky water and sweat) so I decided I needed to take a breather and a quick dip in the ocean. I needed to gather my thoughts and just be for a few minutes before laughing and celebrating. And so I did.

The cool thing about the tri is that you can get your race results immediately. My stats were like they normally are: good swim, terrible bike, and great run. I was disappointed at first, but the more I think about it the more I realize that I can only get better and what’s the point of doing these races without the ability to work harder and train better and achieve more? Not a whole lot if you ask me.

Thanks for reading my novel.