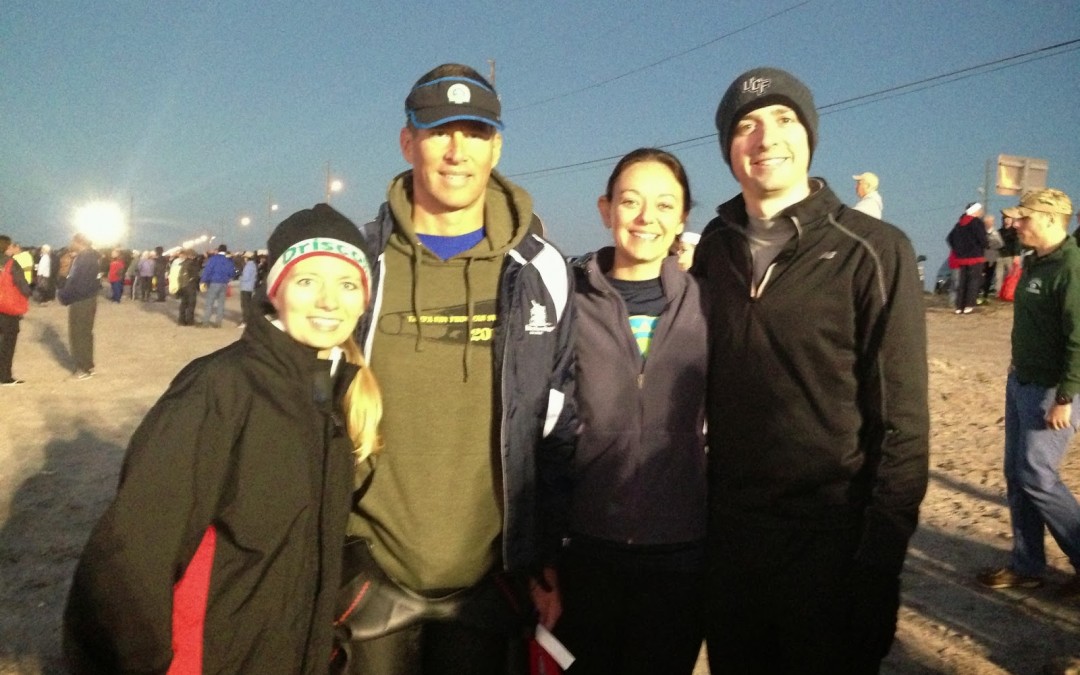 I have done a lot of racing in my short time as a runner and triathlete. After most every event I feel proud and happy to have completed whatever distance I’ve chosen to complete, or try to complete, that day. I am happy to tell people I ran a marathon or completed a triathlon and feel good about it. It is a bragging right, after all. I have no shame in saying that. However, there are times when I run a 5K and while I feel good about it, I know that at this point in the game, a 5K is pretty do-able for me. I’m not scared of the 5K and I don’t feel quite like a rockstar after I run one. Which leads me to this Tampa Bay Frogman Swim. This is by far, without a doubt, the toughest thing I have done to date. I never feel badass. It’s just not in my nature. I usually feel goofy and happy and those other Disney character names, but badass? Nope. Never. That was, until yesterday.
I swam a 5K. I swam three point one miles. It wasn’t fast and I didn’t win, but for once, I feel badass. At least for now or until I run into a wall or trip on my own feet.
The Back Story
The Tampa Bay Frogman swim started five years ago by some military men and Navy SEAL’s to raise money for an injured SEAL officer and his family. It began with nearly 40 swimmers and has become so popular they now cap the event at 150 swimmers who pledge to raise money for the Navy SEAL Foundation. My triathlon coach, whom you see me refer to as Navy Steve, has done the event all five years. I’ve gone to watch this event the last two years. The first year I watched, looked pretty awful. It was cold and the swimmers looked disoriented coming out of the water. The second year wasn’t as cold and folks looked a little better from the three point one mile journey. I suppose this is what finally led me to register, that and Coach Navy Steve giving me a bit of prodding.
I think registration opened in July or August and I hit the website immediately. The swim sold out in five hours and I felt ready for the challenge.
Fast forward to a few months ago, I was training for the Jacksonville marathon and the 5K swim simultaneously. This was good and bad. It was good because the swim training was forcing me to cross train. It only became bad as I hit taper and that normal marathon training fatigue. I didn’t train as much as I should have but I knew that going into the swim and I had a feeling I could finish, barring hypothermia and shark attacks (or shark fistfights). I was definitely nervous heading into this event. It was uncharted territory and distance for me. I didn’t sleep a wink the night before.
Race Day
Early Sunday morning the S.O. and I woke up and started getting ready. The best part about this 5K swim is that every swimmer gets a kayaker. Due to the currents and course across the bay, I’d say it’s absolutely worth it and needed. If it weren’t for the S.O. guiding me, I’d still be in the ocean.
On the way to the swim start, I was more nervous than ever. I had to hit a potty stop before we even got there. And as soon as we got there I checked in and went straight to the porta potty line. My friend Tim calls them “fear poops.” Haha. Gross, sorry.
My wave didn’t start until 8:40 AM and since we got there around 6:45 AM we had a lot of time to get the kayak ready and chat with friends. Navy Steve’s kayaker, who’s been with him all five years, was kind enough to lend us her husband’s kayak so we didn’t have to rent one. 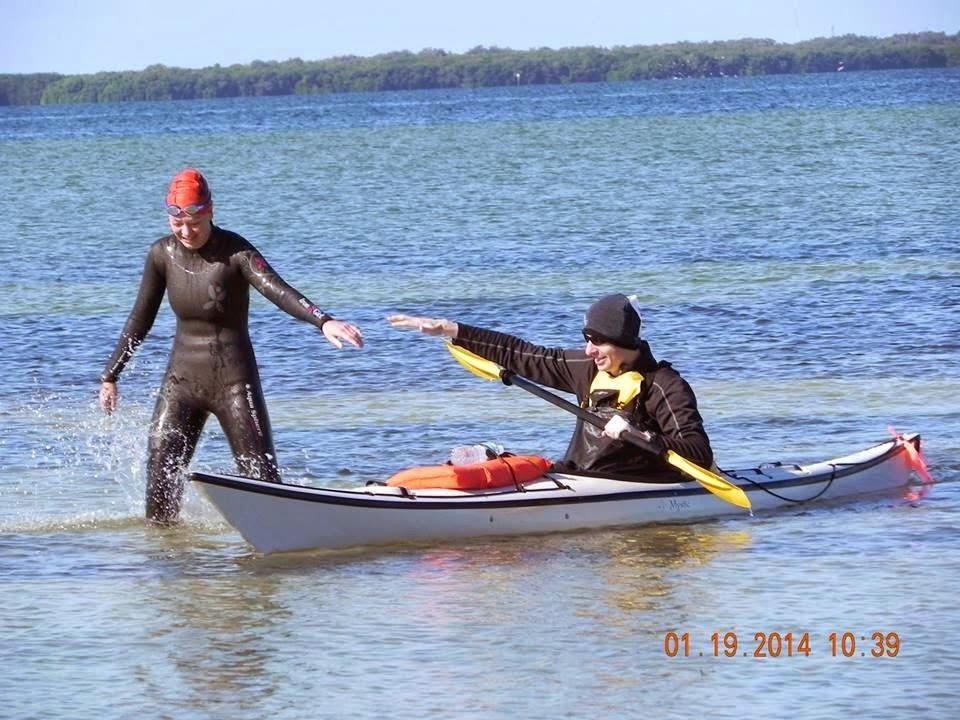 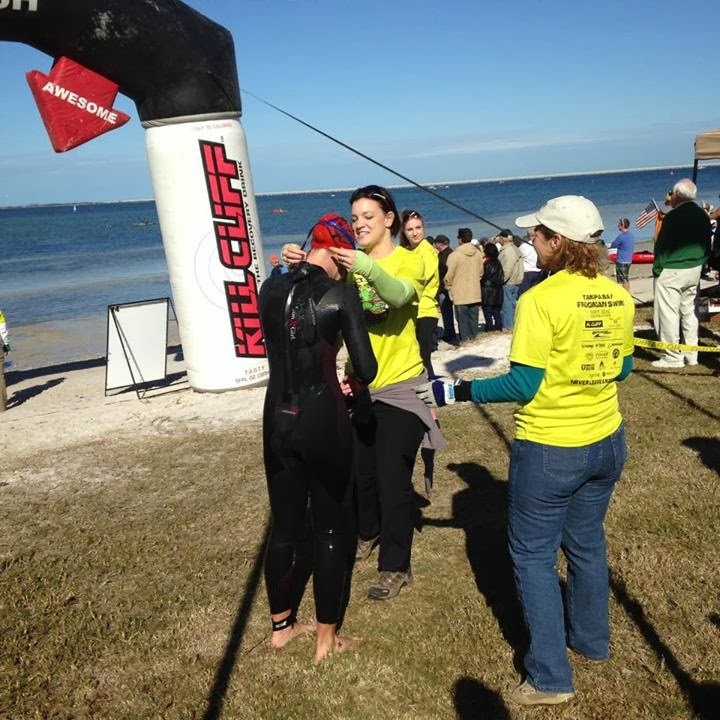 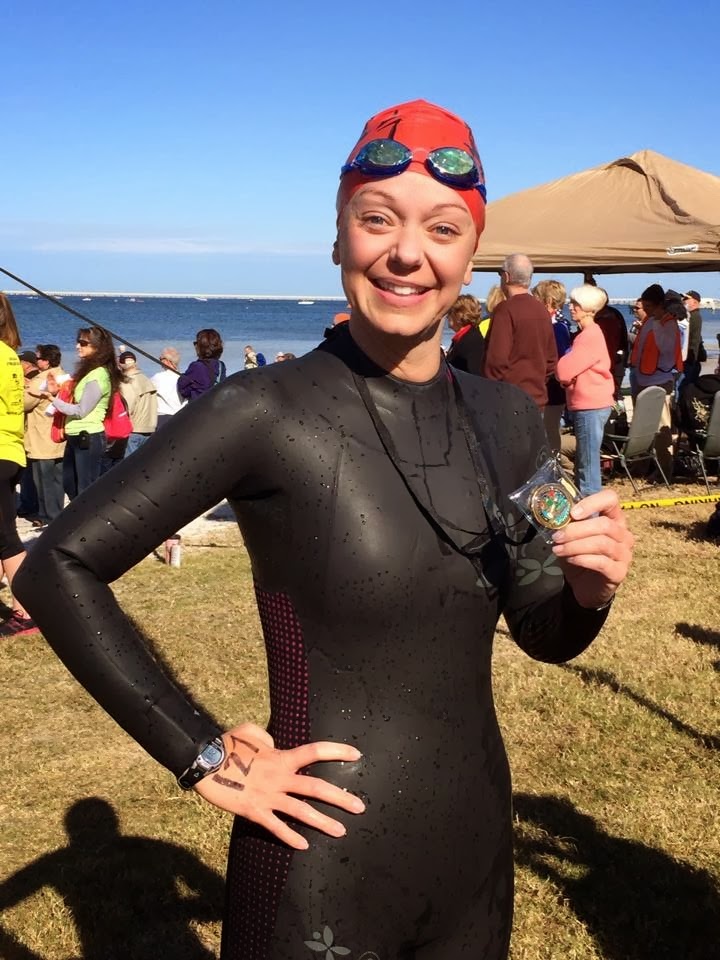 In addition to the coin and stellar goodie bag (water bottles, sunglasses, lip balm, etc) I got what has to be the coolest hoodie and t-shirt EVER. 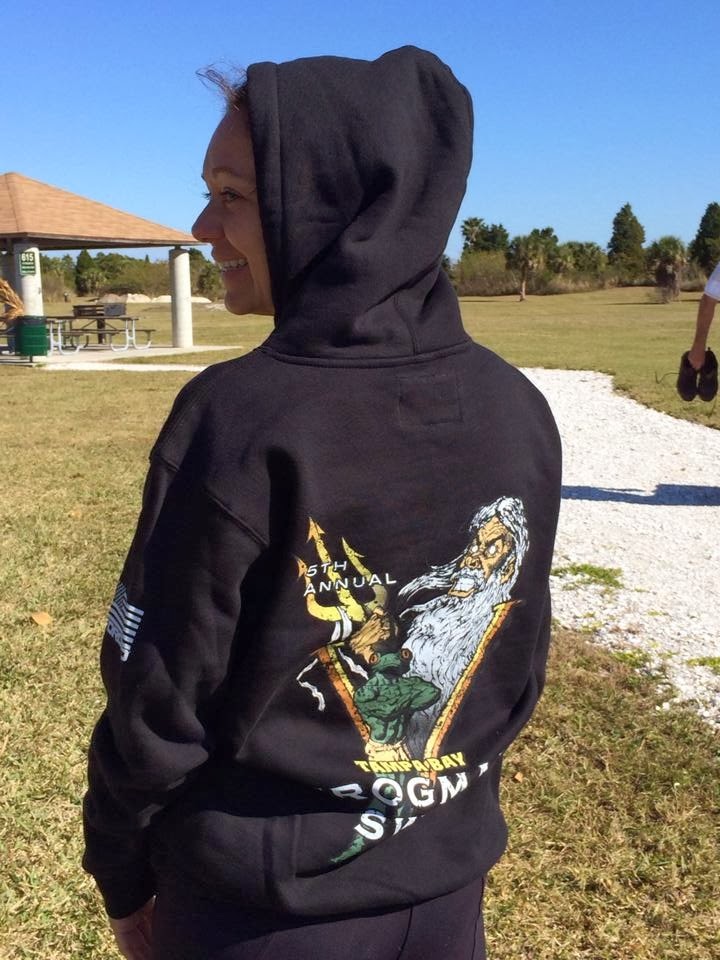 Since this post is already as long as Anna Karenina, I’ll try to wrap it up. Sorry!
After finishing we took one thousand photos and I’m so happy my mom came out to see me finish! She was so cute and excited and yelling for me with my friends. I think it took me about 1:55 to finish. I was way off what I wanted and what I think I can do with better training. The open water is a great equalizer and very humbling. I am in awe of folks who do this year after year (that’s you Coach!) and those who come in with times like 1:06! I am also forever grateful to those Navy SEALs who gave the ultimate sacrifice and for whom this event is truly dedicated to. Their families will recieve help from the foundation, and that’s an awesome feeling. I raised over $1,100 and am really thankful to those of you who donated.
I’m not thinking this will be an annual event because that’s how tough it was for me. I may consider it again in a few years but I will definitely keep supporting it and those who swim and fundraise. I feel that my Ironman swim in September will require more training but this event gave me a lot of confidence for it. I mean, it’s a short 2.4 miles, right? Kidding, kidding.
Thanks for reading and cheering me on. Today, I’m badass.