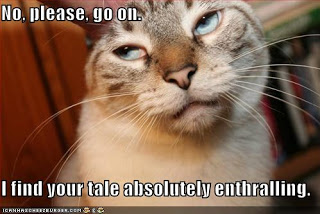 It’s Thankful Thursday again! (Is this becoming a little like Groundhog Day to anyone else?)

As you all have noticed by my whining, er I mean writing, I have been put on the injured list and am thus trying out all new, exciting forms of torture exercise.

I mentioned aqua jogging the other day and some of you gave me blank, open-mouthed stares. Yes, just like the one you are doing now.

I hadn’t heard of it either until one of the BRA members told me all about it. Then, Navy Steve lent me his aqua jogger belt. Basically you put the floaty-belt on (super hot, totally recommend it for picking up babes/chicks/hotties, etc.) head to the deep end and run until your little heart’s content.

(This is kind of how I look except I can’t find a group of people in Compton to join me.) While it is SUPER boring, I am thankful for it. It makes me feel as though I am still running. Thus today, I am thankful for aqua jogging. As a little side note, Deena Kastor trained quite a bit this way during an injury and went on to win the 2005 Chicago Marathon. Not that I am going to win the Marine Corps Marathon after a little aqua jogging, or intense training for that matter, but it does give one some hope of keeping up the cardio and endurance. You can see a lot of it during this very inspirational DVD, Spirit of the Marathon. What are you thankful for today?