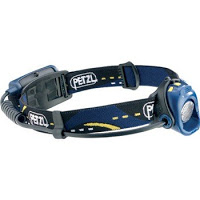 Today I am thankful for my headlamp.

I freely admit that I wear a headlamp. It’s true. But it’s a necessary evil on my Saturday morning long runs that start at 5:30 AM. It’s also necessary during the winter months when it gets dark earlier. When I first joined the BRA they told me I needed one. I thought to myself “Really? It’s very dorky looking.” But after my first scary, dark, murderers-must-be-in-the-woods-run I found myself thinking it was the best idea I’d ever heard. Fashion be damned.

Both the Chic Runner and the Redhead think it’s hilarious. If there was a runner’s cafeteria I am pretty sure I would be sitting with my square, weird-pepperoni pizza and chocolate milk all alone. It would be like a scene straight out of Mean Girls. The cool kids are rockin’ their new Asic-Mizuno-Brooks hybrids and I’m with the math-letes.
Actually, when I first got the headlamp all I could think was “It’s the Miner 49er!” from Scooby Doo. After googling around, I found the youtube clip with said Miner 49er and dude’s not even wearing a headlamp. What the crap kind of miner is he anyway?
What are you thankful for today?