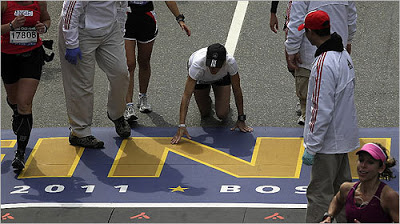 You ever notice how when a friend finishes a marathon and comes back with the stories of their accomplishment is gets you all pumped up? Yeah, me too. This is what happened Tuesday night at my running group meeting.

Take the story of my good friend Hollster, first time Boston runner. She busted her butt during the Boston training and when she neared the finish line of the actual Boston Marathon her legs gave out. She was suffering from dehydration and she went down on her knees, unable to walk or run another step. Her two running mates Strawberry E and Russian T tried to carry her but were told by an official she had to cross the finish without assistance. And guess what? She did. She crawled. Out of sheer determination and the will to finish and not give up, Hollster finished. And she even made the Boston news for a section titled “Pain and Perseverance.” If that does not get you fired up, I don’t know what will.

As I sat listening to the amazing stories of my running buds who completed the Boston Marathon, some for the first time, some for the 6th, 7th, 8th, and 9th time I started feeling the itch again.

It wasn’t that I knew I never wanted to run a marathon again, but Ft Lauderdale had left me needing a break. Sure, I had a great PR but I didn’t have “fun” and wanted to focus on tri’s and shorter races this summer.

But a funny thing happened. P-Funk, who had been on the fence about running another marathon since Gasparilla 2010, got pumped up too. And before we knew it we were talking about what would be our next marathon. After a little bit of discussion, since we had sort of batted the idea around previously without really committing, we decided we’d shoot for the 2012 Miami Marathon.

And there you have it. From the inspiration from our friends we’ve decided to give the marathon another go. If I make it through Miami it will be my 6th marathon, or “sex” marathon as we like to joke in the running group. (Back story: typo on the running group page wherein six was accidentally typed sex and now anything that is six is sex. Yes, we are all adults. I think.)

Today I am thankful for the inspiration that will lead me to marathon #6 in Miami, home of palm trees, late-late night dancing, beautiful sandy beaches and the Golden Girls. You know how I love them.