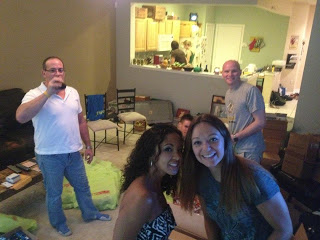 The countdown to my first ever 5K race as the director is under way. It’s been a long week and quite frankly, I’m starting to wonder if the race directors for marathons and big triathlons ever actually sleep. I’ve been so busy from the time my alarm goes off in the morning until past 10 PM at night (late for my old ass) that I’ve gotten in exactly zero workouts this week. While this doesn’t bode well for my Augusta training, it is probably helping my hammy. It was super grouchy last week so I’m just going to rest it some more and hope for the best.
Speaking of that 5K o’mine, I’ll definitely be writing a post on how to get a 5K started and maybe a secondary post about how I’ll never complain about a race director again. Heh. There’s a lot of work that goes into putting on a race, even a little bitty 5K.
In keeping with the 5K trend on this here post, today I’m thankful for volunteers. I’ve always been thankful for volunteers at races I’ve competed but organizing a race with the help of volunteers brings a whole new level of thankfulness. At this point, I’ve got over 500 people registered and my Co-Director and I have enlisted a lot of friends and family to help out.
We put a few people to work last night stuffing the race bags. Kat being one of them. Thanks girl! We were running a small sweatshop/assembly line and got over 500 bags stuffed and packed for pre-race packet pick up. We may have also had some adult beverages.

Seriously THANK God for volunteers. Without the volunteers, Lazy Runner and I would have been stuffing bags until the cows came home. In addition to the bag stuffers, we’ve have friends volunteer for the race itself and we’ve had a lot of great contributions via goods, services, and ideas. Fortunately, I haven’t had to organize all of the volunteers alone. I’ve had a huge help by way of a Volunteer Coordinator. Thanks Katherine!