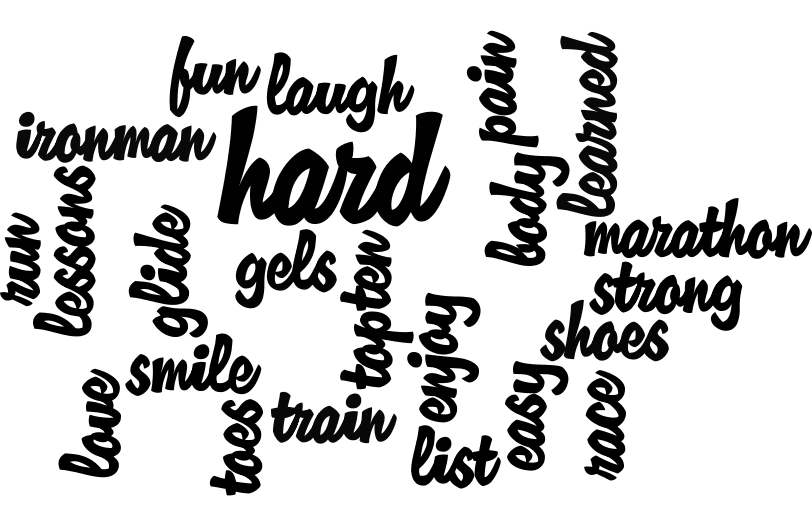 I started seriously running in 2009. I always enjoyed running but it wasn’t until my first marathon (Disney 2009) that I became an addict. I made a ton of mistakes along the way and most of them were harmless (and hilarious) but some cost me. So here they are, the Top Ten Lessons I’ve Learned About Running.
1. Let’s just get this one out of the way first, mmkay? I have a pretty sensitive stomach so introducing new things on or before a run sometimes often go awry. I learned the hard (and gross) way that I cannot eat peanut butter or anything with fat before a run and for the love of God, NO Honey Stinger gels (so sad, so delicious) during a run.
2. Everyone always extols the benefits of have a running partner. And while I have had several great race specific running partners, I learned that this is a tricky and sometimes slippery slope. If you end up being slower than your friend it can suck, if you end up being faster than your friend it can suck, if your friend ends up being a bad friend it definitely sucks. Basically finding the best running buddy is tough. I currently like to mix it up with various friends and have learned the key to having a running buddy is communication. You say the pace you plan to run AND THAT IS WHAT YOU RUN.
3. When I first started racing I just ran along and followed the folks in front of me without really paying attention to the road ahead. This seems fine, right? Wrong. You have to run the tangents. It’s like cutting the course but it’s race legal. Hell, most race directors advise you do it. It’s especially important in longer races.

4. I ran my first marathon VERY undertrained and it hurt VERY badly. After that I told myself I’d never complete a race that undertrained again. I stuck to that for the most part, with the exception of a triathlon with hills that I had no idea how to gear for. It was a kick in the pants and another reminder to train for your race. Please trust me on this lesson. Of this list, it may be the most important. Why would you want to race at less than what you are capable of anyway?
5. Never say never when it comes to running. I said I’d never do an ironman and I did one. And I used to say I’d never run an ultra. However, I’m fairly certain that I will want to run an ultra one of these days, even if it’s “only” a 50K. But, I will NEVER do an ultra distance ironman. That is just insane.
6. This is actually one that I know good and well but sometimes I just forget and it stings like hell every time. No really, it actually stings. Use body glide for every run over an hour. I forget this some mornings and when I get home and hop in the shower I feel like I’m going to die. I will eventually fully learn this lesson. This could be the year!
7. This is a newer lesson for me and I can thank Coach Jon for it. He tells his athletes to smile during races. I have done this in the past two races now and it really helps. It has pulled me out of the pain and reminded me that this is FUN! I love running so I should smile because I get to do it and not everyone has that luxury.
8. Speaking of good coach advice, Coach Steve drilled it in my brain to “Run hard on the hard days, and easy on the easy days.” I’m good at this now. I actually keep those recovery runs in the recovery run zones. There was a time when I’d get caught up in chasing someone down or try to keep up with speedier folks and for a recovery run, it’s just not worth it.
9. I’ve learned that I’m a totally neurotic over thinking runner and the lesson there is my new favorite motto from my friend Linda: Don’t think, just run!
10. Last but not least, I’ve learned that I am capable of so much more than I realize. I used to think I’d never be able to break four hours in a marathon and I used to think I’d never be able to ride my bike 100 miles or swim 2.4. Every race or run is an opportunity to learn more about yourself as an athlete.
I hope this list can help others. So take my lessons and run with them – literally. Have a great weekend!