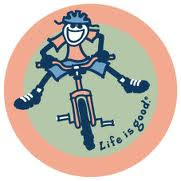 Yes, I’m doing a Three Things Tuesday and yes I know that doesn’t have any alliteration to it, but I do what I want. I had three things to report to you all and I couldn’t figure out a way to title the post, thus here we are.

1. I had a cycling breakthrough this weekend. First of all I rode the most last week that I think I’ve ever ridden in one week. Granted, some of you ride that much in one day but it was still a lot for me and Dolly. Secondly, I rode 31 miles on Saturday and didn’t feel miserable at all. I rode the 7 mile paved loop trail with a friend and he let me draft off of him for one full loop. We averaged 21 mph for that loop and that’s another first for me. I’ve never ridden that fast for that long. Again, small potatoes to some of you but big steps for me. And lastly, I am pretty much over my clipping issues. I don’t know if I’ll be able to get out quick in an emergency stop but I’m not panicking about it anymore. Score!

In other cycling news I’m excited that my girl Jess over at Cuban Running Crisis got a road bike and I tried to impart what little wisdom I have onto her during our ride on Sunday. Yay for cycling and cycling buddies! Who am I?

2. It’s been almost a full two weeks since I’ve gone for a run. And while that kind of sucks I’m not all that worried about it. In fact last night I tried a class at a park about two minutes from my house called “crossboot.” It’s similar to crossfit and I loved it. I love burpees and squats and actually using my arms. When the class had to run I jumped rope. I also love to jump rope. Who’d thunk it? Am I sore today? Hell to the yes. But was it awesome and something I want to do again? Abso-freakin-lutely. Am I done asking myself questions? Hm….

3. I went to my first physical therapy (PT) appointment today. I have to say that I wasn’t overly impressed. The therapist checked my alignment and leg strength and then had me do some various stretches. I’m sure I’ll go this week and next but at $25 a pop, I can’t say that it’s something I got a ton out of. However, I’m not going to give up on it just yet and hopefully it’ll get me back to running soon. She (the therapist) said since I’ve already taken two weeks off I am A-OK to stretch again without risk of injury. She also said I shouldn’t have to take more than another two weeks off. I agree because my leg hasn’t bothered me since Saturday and that was just from standing all evening at a party. And before you all start yelling at me, yes I’ll keep going and yes I’ll keep resting. No worries, as I definitely don’t want to make it worse or set myself back.