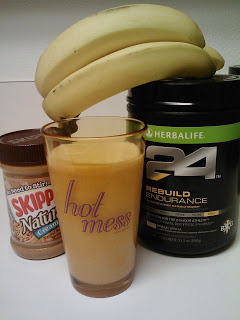 This title is the best I could come up with for the randomness that is this post but I had a few things to share. Just go with it.
I’ve been meaning to post about the nutrition I’ve been using both during my workouts and after. I have to give a big thanks to Jason of Cook, Train, Eat, Race because he so kindly sent me Herbalife to test out. I’ve been using both the Prolong (during workouts) and the Rebuild (recovery drink). I didn’t like the Prolong at first because it’s got that whey protein taste that I just wasn’t used to during a workout. Coming from a history of only drinking Nuun during runs it took me some time to get used to it. I have seen how much it’s helped me during my long rides. I usually do one bottle of Prolong and one bottle of Gatorade.
Post tough workouts when all I want is a smoothie, I’ve been whipping up a beverage using the Rebuild in vanilla. It’s quite tasty and you can add all sorts of stuff. Last night I made mine with bananas and peanut butter. Yum!
In addition to the calories I take in with the Herbalife Prolong, I’ve been eating Powerbar Energy Blasts (with the caffeine natch) and Honey Stinger Waffles and Honey Stinger Gels. The Honey Stinger Gels are quite amazing. I want to put them on toast. But I won’t cause that would be weird. Says the girl who licked her own arm for salt. I did get to try a Bonk Breaker that will be on the Augusta course and I found it quite tasty so I’ll be looking forward to those.
Switching gears here (I told you today was random), my IT band is feeling much, much better. Thank you all for the tips. It appears we all have dumb butts and IT band issues. I used the stretchy band thingy last night to do some strengthening exercises and will continue to do so for the next two weeks. I also did yoga in the park on Sunday and a 90 minute Bikram class last night. I think Bikram helps a ton because it’s not just stretching, it’s a lot of strengthening too.
Speaking of yoga in the park, I must show you all these signs that are up around the fountains where the free yoga is held. They are those fountains that shoot up from the ground so kiddies can play in them. In case you weren’t aware, it’s best not to play in fountains if you are ill from diarrhea. Thank God they have that sign up or I’d be all over it the next time I get sick. 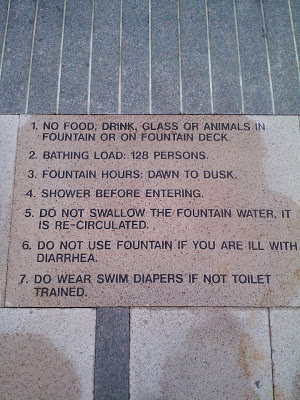