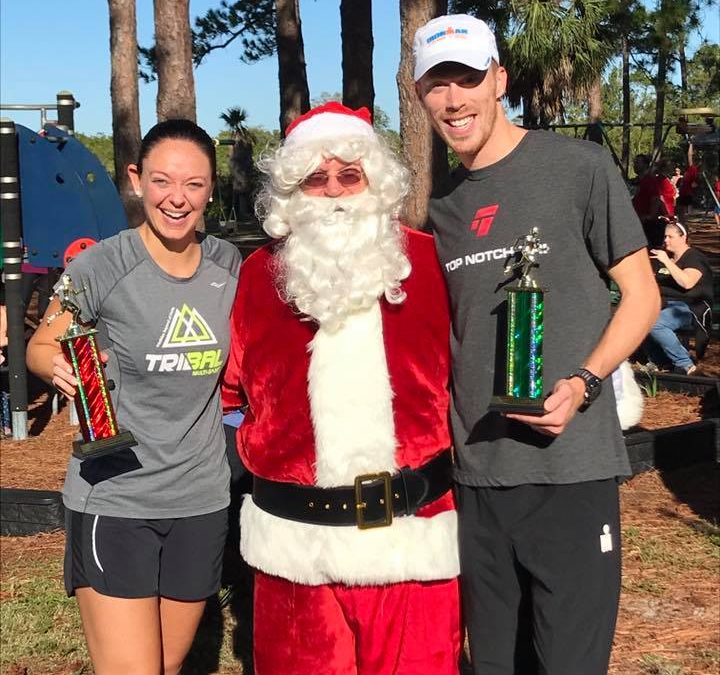 Yes, you read that right. And yes this is the right blog. You haven’t stumbled upon one of the super, duper speedy ladies. It’s just me, Beth.

Let’s back story this bitch, shall we?

On Thanksgiving I really wanted to run my local Turkey Trot. But, being the human barometer that I am, the weather turned, and I had a headache that began at 12 PM midnight and lasted the whole morning and into Thanksgiving day. I felt terrible when my alarm went off to get up for the Turkey Trot so I skipped it. I don’t like a DNS but I felt like crud and knew it was the type of headache that wasn’t going to go away out without a fight. I felt ready to race otherwise and was really looking forward to it. But alas, I took another cocktail of ibuprofen and coffee and hot showers and got back into bed.

Fast forward to two weeks later, Tuesday, December 5th. I asked Coach Jon if he thought I should race a 5K that weekend. He said go for it, but find the best course. Fortunately for me there seemed to be several good options. I finally narrowed it down to two races being held that Saturday. I honestly went back and forth on them numerous times. It was a little nutty because it was just a local 5K. But, I wanted to find the best conditions.

I finally settled on the Reindeer Run in Palm Harbor, FL, as they were nearest to one of the most delicious  vegetable shops near me. I promptly registered and wouldn’t you know it? That same vegetable place was going to be at the race. SCORE!

I woke up and headed to the race start. I saw several friends and milled about with the other runners. I looked for the local “fasties” and my own age group competition (don’t act like you don’t do this too) and I didn’t see any of the usual suspect. Huh. “Well, I’m sure some random speedsters will show up,” I thought to myself. I walked over to say hello to the man who was doing the timing as I know him from some other local races and he asked what my goal time was. I told him, “I don’t know, 23 to 24?” Of course, this was a lie as I knew damn well I was going for 22 to 23, but I didn’t want to shit the bed and feel stupid telling him those times. Yes, I have problems. He responded with, “I think you’re going to be leading the women’s field.”

I shook off what he said, which included something along the lines of “this is more of a fun run for most of our runners” or something AKA it’s not a competitive field, and headed to the start line. I just assumed that one real fast chick would pop up at the start and I could go back to just worrying about my time and not dying. This being in the front thing is a real mind frick. Ha!

As I lined up at the start I situated myself behind the man I knew would win, a friend named Jeremy, and several other men, women, and the children. Yes, those children who we all know and love at the start of races. You know the ones. The ones who dart out like maniacs and then are walking a quarter mile in, save one or two actual genetic freakshows who run 20 minute 5K’s at age nine. I’m looking at you, Keara and Mason.

Anyway, the horn sounded promptly at 8 AM and we were off.

I noted Jeremy shoot off and soon become completely invisible to me until the turn around. I also noted there were a few women with me for about a half mile and then they dropped behind. I had set my watch up to auto lap on quarter miles and knew I needed to be between 1:49, on the fast end, and 1:54 on the slow end. I didn’t want to run any slower than 1:54 per quarter and wanted to start at about 1:50 and end at 1:48. I instead started at 1:48 and hit two 1:59’s in the last mile. Oops. Pacing is an art, right? Er….

Anyway, I ran along and tried to look at my splits each quarter. I played count down the quarters and worried that there was a woman right behind who I would have to sprint with at the end. This actually helped me the first half of the race as I started to suspect I was in fact in front of all of the women. What. The. Crap.

Fortunately, this run was an out and back so as I made the turn around half way through I could see all the runners coming back toward me. I was specifically looking for the next woman as I really was not looking forward to a head-to-head sprint finish, I was starting to get a side stitch. I saw the second place woman about a quarter behind me. I figured so long as I didn’t completely die I would be ok. And I told myself that I certainly did not want to give up an opportunity to win a 5K (the women’s field, of course) so there’d be no slowing down. Ahem.

Obviously, there was slowing down.

I continued to push the pace and mile two was pretty good. My quarters were 1:52, 1:52, 1:53, and 1:52. And then I began to drive the struggle bus on the third mile. I saw a few friends on the way back in and they yelled, “You’re in first!” This was so stinkin’ cool! Even a few runners I didn’t know let me know I was the first female by cheering. If you are a runner who does this to people at races, god bless you. It’s very awesome! I will more than likely never experience this again but damn I loved it.

I am 100% aware that this was not a super competitive field as most of our local 5K’s have women who win in the teens. However, I will take the win and my current 5K PR time of 23:13! I’m coming for you sub 23! 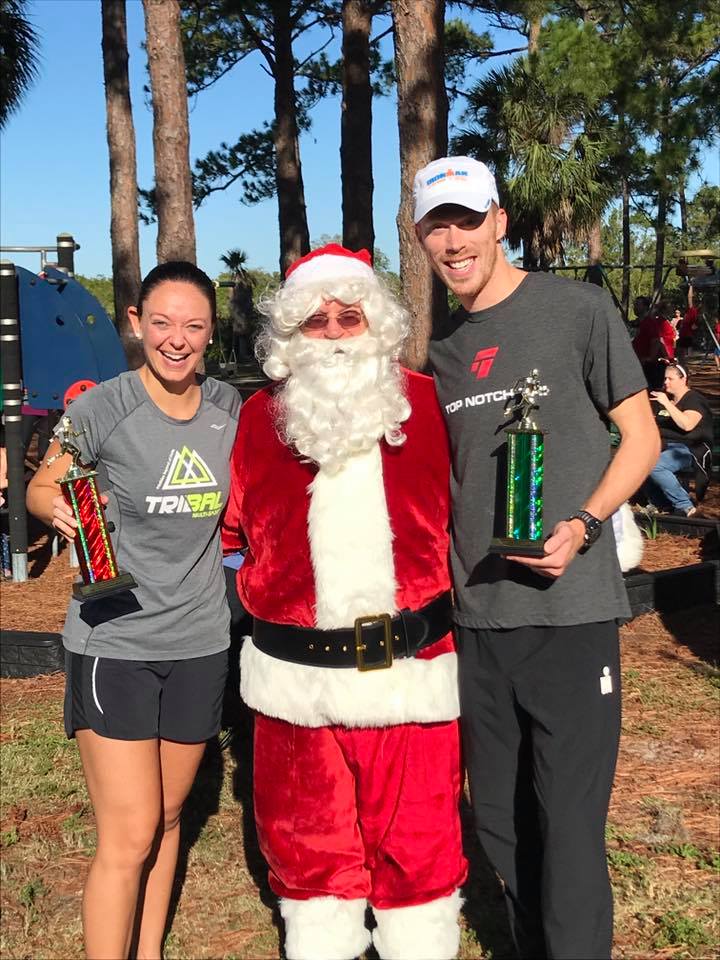 Congrats to my friend Jeremy on his overall, overall win!

And I had a most delicious  vegetable post race. I earned it!

Thanks for reading. Have a great rest of your week.