To race or not to race 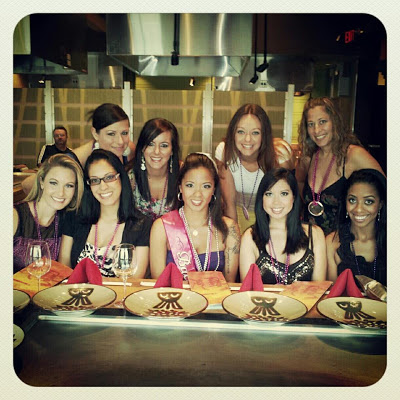 Oh snap! Tuesday is here and I haven’t got one single idea for a creative post today. You get a mash-up of sorts. Since classes started this week (I work in higher ed administration) it’s been straight bananas at my job. This weekend went by so fast that Monday just seemed like it was here in the blink of an eye. Ca-razy.

On Saturday I volunteered at the Escape from Ft De Soto sprint triathlon and it was awesome. I got to do the body marking. It was like a parade of hot dudes that I got to draw on. I may or may not have written my phone number on some people’s calves. Heh.

Saturday night was Kiki’s bachelorette party in Orlando. P-Funk and I headed over there and joined the girls at a delicious Japanese Steakhouse for dinner. The most hilarious part was when our desserts came one of the servers did his rendition of a sexy dance. I was crying it was so funny.

That’s a whole lot of pretty right? Yup. That’s how I roll.

Sunday I got in a 31 mile ride and it was so windy I was cursing quite a bit. Fortunately a buddy of mine showed up and kept me company. I felt bad because I am so much slower than he is but he was doing his “easy” ride so it worked out. My average speed is getting better but I’ve still got a long way to go.

Finally this morning, I swam and my injury, AKA Hampton, only gave me a little twinge when I got out of the pool. Sadly, it’s still with me, but at least it seems to be getting better. I’m so torn on that upcoming St Anthony’s tri. On the one hand, I REALLY want to do it because it’s my 2nd year at this race and I’ve gotten so much stronger on the bike. On the other hand, I don’t want to re-injur this dumb hamstring and I don’t want to run like a sloth.

What do you think I should do? I’ve got two weeks. I’ve been aqua jogging and the doctor cleared me to race but wasn’t really optimistic about how I’d feel after it…..