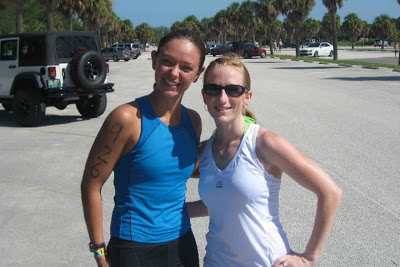 Dudes. This was probably one of the most fun races I have done. Ever. No seriously, I had a total blast and followed it up with a great day. It was one of those days I didn’t want to end. Sadly, this post is gonna be long as shit because of that. Fair warning.

The night before the race (Friday) I left a key under the mat for Spike and Red. I was so excited they were coming to visit but I knew I needed to get some sleep as they’d be getting in after my bed time. Yeah, so that could have been any time after 7 PM. Heh.

Anyway, I woke up at O’dark thirty and headed to the race start. Once we arrived we met up with Aloha Kris, Navy Steve, Little J, Cay-See, Miss Mandy, Tiny Tish, Glen, and lo and behold, Chris-Brian who was racing! He had signed up secretly and had been training. He had his game face on.
Before you knew it we were all heading to the water and Red snapped some great photos! 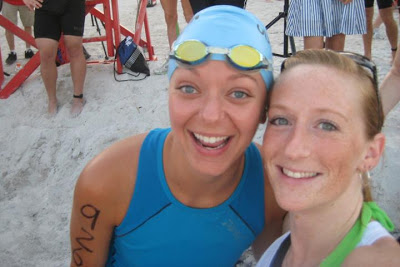 Me and Red with our pre-race grins. 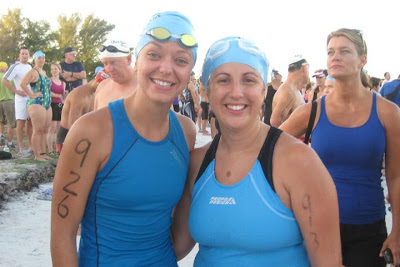 Me and Jessica from the Cuban Running Crisis. It was her first tri and she did GREAT! She swears she’ll have a new blog up soon…..

Before I begin the breakdown, the back story here (and the reason this post took so long) is that when they finally posted the results the times are all jacked up. They left a note saying “The timing device operating on one side of the transition exit failed hence there many missing transition times==we combined the time from the swim finish to the bike finish for the bike segment and the bike finish to the finish line for run time” and that they may be able to fix it but I don’t have time for all that. (I’ve only checked back 956 times.)

At first, I was cheesed off at this, but you know technology just doesn’t work sometimes. It stinks that I can’t get a real accurate time for my splits but I’ll work with what I’ve got. 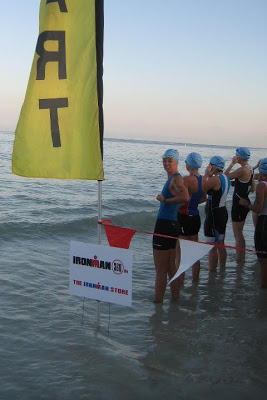 That’s my new favorite spot to line up. Front row, inside.

Before I knew it we were off and swimming. I felt good. No, I felt great. I was cruising and only got slowed up when I ran into the pack of yellow-capped dudes from the wave in front of mine. I was frustrated because I was having a hard time getting around them and didn’t want to swim too far off course, so I just kept it moving.

As I got out of the water I looked at my watch and saw 7:52. Hot damn! I ran/jogged toward transition and what did I see? My amazing friends wearing the KOM shirts! For those of you on Facebook, you’ll know that I’ve been obsessed with the polka jersey worn by the King of the Mountain during the Tour de France. It’s really all I was talking about and I kept saying I wanted one.

It was so awesome. Red put hers on later and it was like a dress on her, tiny thing that she is. 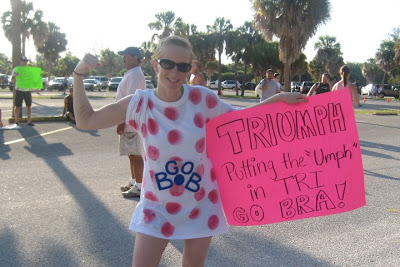 THE BIKE (10 miles)
What can I say here? I biked. I didn’t love it and tried my best. Some super fast people blew my doors off while I in turn passed a few on beach cruisers and mountain bikes. I tried my best to keep the pace up and not bust my butt as I unclipped slowly at transition. I’m still awkward. Heh.

Yay! The Run! Have I mentioned that I’m always so happy to see the run? Well, I am. Of course it’s always hot as balls but I feel much less goofy running than I do on the bike. I was also SO happy that it was a 5K left to go and then I was DONE!

Spike, Red, and the rest of the cheer squad was yelling their fool heads off and I was cracking up when Spike jumped in with me for a bit and ran alongside me in their polka dots totally like those crazies in Le Tour. It ruled.

(You can see their polka dots and sort of see my ankle as I’m right in front of the guy in the black shorts.) 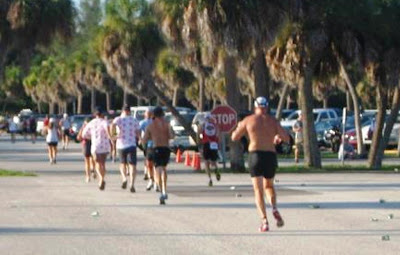 This is my final sprint to the finish. I was hot but coming in strong and really had such a fun race day! 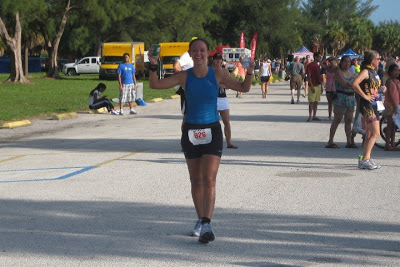 I’m super happy that I exceeded my goal time of 1:15 AND had a twelve minute PR. You really can’t beat that! Plus I had so much support from friends and got to see two first time triathletes kick butt! CONGRATS GUYS!

I was so sad to see Spike and Red leave. I seriously LOVE these two people and can’t imagine my life without them. THANK YOU both so much for coming out and filling me in your jam packed weekend. I finished out my Saturday with some home-made chicken and dumplings and went to sleep smiling. 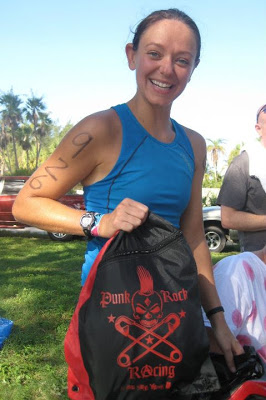 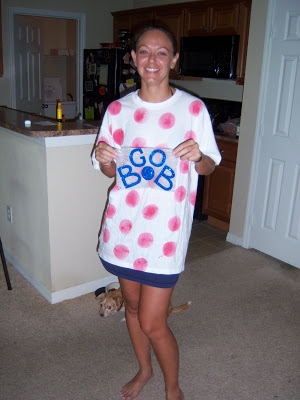 Me with my very own KOM shirt and GO BoB sign made by Red. Oh and of course, Lloyd with his typical photo bomb.