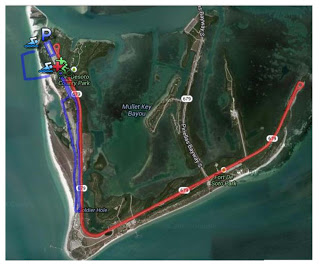 I’m alive! I made it through two sprint triathlons this weekend. And let’s be honest, it wasn’t like I was doing back to back ironman races or anything. It was tough, but totally doable. Here’s the report for race numero uno!
On Saturday AM, the S.O. and I got up super early to head to the always lovely Ft. de Soto for the annual Top Gun Sprint Triathlon. I’ve done this race every year since 2010 and it was my first ever triathlon. Hence, Saturday was my tri-iversary.

Since we didn’t get our race packets prior to race day, we had to get to the race site uber early. I have late anxiety and I hate feeling rushed in transition. Been there before and it sucks. Thus, we got there early enough to get our packets, get body marked, and set up our gear. When we got our packets we realized our numbers matched our ages. S.O. was number 34, and I was number 33. This also meant we were on the same rack. Say what?

Yup. The RD put us on on the VIP rack and it was pretty cool. We were close to the entrance from the swim and bike and we got to be right next to each other. Thanks so much to Top Gun organizers for that! It was awesome!
Shortly after we racked and were all set up, we headed to the race start. This race typically brings out just about every triathlete in a tri-county area. That means, it’s super competitive and there’s a lot of racers. I feel very fortunate to know so many of these great people and am always happy to race alongside them. I will say that knowing so many other triathletes at a race can increase my anxiety level but I still end up having a blast year after year.
The S.O.’s wave was gone a full half hour before mine as my group didn’t start until 7:33 AM. I’m used to this late start stuff. It seems to happen to me a lot. I didn’t even worry about the heat this year. It is what it is. AKA suck it up, buttercup.
The Swim 1/4 Mile
I lined up on the front, inside since it’s where I feel most comfortable. The horn blasted and off we went. I did some dolphin diving for as long as I could and felt the standard bumps and splashes of the women around me. The water was a lot choppier than last year and I didn’t feel quite as strong on the swim as I would have liked. I swam as hard as I could and as soon as we hit the last turn I was ready to go. I was actually looking forward to getting on my bike. Who am I?
Swim Time: 7:44
T1
T1 features a nice, long run from the ocean to the bike racks. I don’t exactly think it’s a half mile so I’m not quite sure what the eff I was doing but my T1 was miserably slow. Yes, I wear socks. Yes, I know in sprints I probably shouldn’t. I’ll work on it. (I’d like to point out that when I got to my bike, the S.O.’s bike was ALREADY BACK and he was on the run. Rude.)
T1 Time: 4:31
The Bike 10 Miles (technically it’s about 9.6 miles)
The bike course at this race can be brutally windy. It’s sometimes so miserable that I’ve been known to whimper while training on it. Fortunately, this was not one of those times. The course is flat and having ridden it a billion times, I know it very well. Saturday’s course was blissfully windless until about mile 7 or so. In fact, I think there was a tailwind all the way until that point. At least, I was cycling like there was.
I could not be more proud of how I rode on Saturday. I hustled. I saw numbers on that bike that I’ve never seen – at least not for more than a few miles. I am really just so damn pleased with this bike time that I don’t have a lot to say. I passed more people than passed me. And those who passed me were mostly the dudes in the 25-29 age group behind me. Whippersnappers.
Bike Time: 28:01 (avg 20.6 based on 9.6)
T2
Oh Jesus. Slow again. I had a tea party with the Queen to celebrate the new royal baby or some shit.
T2 Time: 2:45
The Run 5K
I REALLY wanted to run eight minute miles but for some reason I felt sluggish on this run. It was hot but again, not a big deal. I’m used to a hot 5K. I can only guess that the flat bike had something to do with my run. I tried to keep it in the low eights and focused on picking people off. I also tried to remind myself that at any given time an age grouper woman could come along and blow my doors off. Oh, and one did. This girl was hauling. Eh. It happens.
Run Time: 25:50 (8:20 pace)
Overall Time: 1:08:53
Final Analysis
Oh man, did I geek out on this one for you guys! I put together this handy little spreadsheet and golly it makes me happy. Check it.

While it appears that the transition rankings are missing from 2010 and 2012, and the 2011 timing chip issue (it combined the transitions with the run and bike), you can still absolutely see improvement. I may have had a slower swim this year, but the current from last year was definitely not going to happen. And in looking at just the swim, bike, and run you can actually see….consistency!!! This makes me really happy because I’m no longer looking like a runner who does triathlons. I am actually looking like a true triathlete, at least in this race. My transitions dragged me down but I know this is the fourth area of triathlon and just like the other three, I can and will get better.
I had a fun day with my tri buddies and was thrilled to see Meghan complete her first triathlon. I sure am happy she’s not in my age group! She did amazing!
There were a ton of bloggers out there and from what I’ve read, everyone had a good race. Congrats to everyone who raced and thanks to the volunteers, race organizers, and spectators!
After the race and breakfast with the S.O. and the Iron Goof, I headed home for a way too short nap before heading out to triathlon number two, Scenic 17….to be continued….