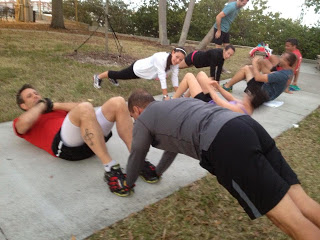 Ow. I’m sore.
This week on “B.o.B.’s comeback trail” I hit up Track Tuesday and Crossboot. Track was on Tuesday, duh, and last night was Crossboot. I really needed both of these workouts as they have helped to set a benchmark that I can grow from. Er, grow back to where I was and want to be. Did that make any sense? Hm. Let’s keep it moving.
Track Tuesday
Track Tuesday’s workout consisted of 4 by 400’s, a mile, and 3 by 400’s. As expected I got moved back a couple of groups and was A-OK with that. The group I ran with had a woman named Lynn who was awesome at holding the pace, which I needed for sure. I had no idea how fast to run and how I’d feel so I just followed her lead.
The first set of 400’s for my group were to be run at 1:50, the mile at 7:32, and the last set of 400’s at 1:51. After the first 400, I knew I’d be ok with those and that pace. It was the mile that had me most concerned and for good reason. It hurt and I struggled. I didn’t hit that 7:32 pace and saw my pace group get further and further in front of me. I was told by Coach Dror repeatedly to drop my arms and stop hunching. What can I say? T-rex likes high arm running.
I wound up running that mile in 7:42 and that’s ok. It was my first week back and I hit my 400’s. It shows me that my speed will come back and that I’m lacking in endurance. No surprises here.
Crossboot
I love and hate Crossboot all at the same time. I may have talked about Crossboot in the past but as a refresher it’s a mix of bootcamp and cross fit style workouts with the team building and competition aspects worked in. There’s lot of partnering up and lots of positive instruction from the owner. I’m a big fan of the team portions because they do push you. I love that. I’m terribly weak right now and I’m so freakin’ sore that I know tomorrow is going to be torture going up and down my stairs. I hate that. I know it’ll make me stronger and everyone knows that stronger typically helps runners in the long run, especially in that core strength area.

I have a few more workouts to get in this week before my 1/2 mary on Sunday. I’m sure it’s going to be an interesting run. I can’t decide between wearing a tutu or wearing green for St. Patty’s Day. What do you think I should wear? Big decisions people. Happy Thursday!