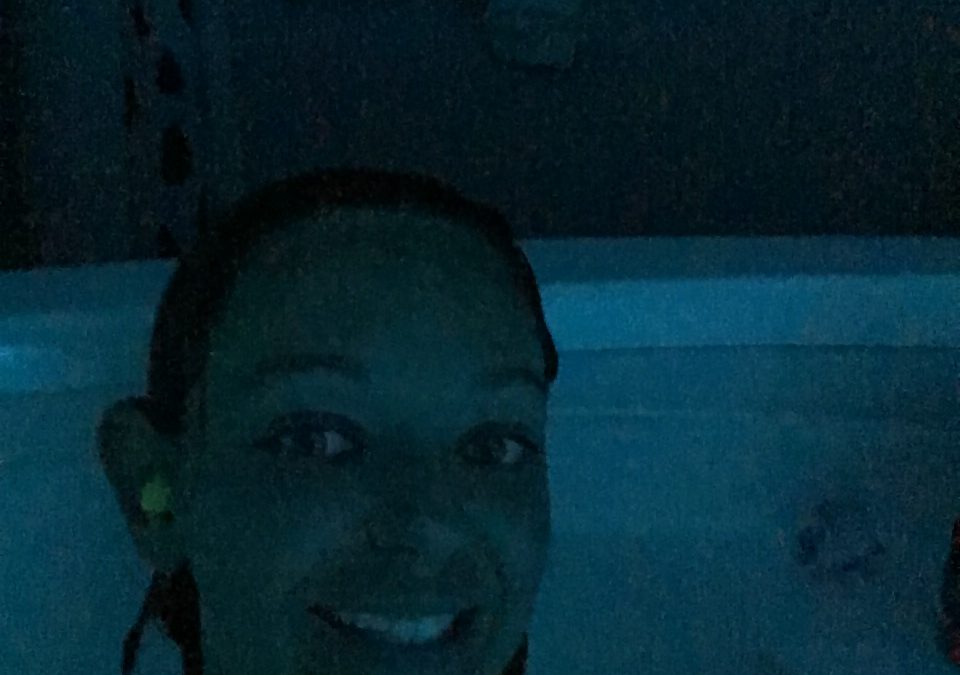 I’ve always been a water baby. I can’t remember not knowing how to swim. I never had actual learn-to-swim-lessons even though I do remember my mom telling me to, “kick, kick, kick.” Being a Floridian, it’s a prerequisite that you learn to swim early and more often than not, you grow up with a pool nearby, if not in your backyard. I didn’t learn swimming technique until I was about 14, but I could always jump in a pool and have the best day ever.

In addition to my love of swimming, I just really love being in water. If I’m not feeling well physically or emotionally, I often plop myself into the shower and sit down in the tub. After my dad died, I spent many nights crying in the shower. Water just makes me feel better.

A while back I had heard about float therapy. The only place that offered it was pretty far from both my home and my work and I forgot about it for a little while. But, from what I read at that time, you just float in a big tub. I figured I could do that just as well at my house. Ha!

A couple of weeks ago, I was scrolling through instagram and my friend Kerri, a local yogi, posted a photo from a float tub at a yoga studio, Kodawari, that was much closer to my job. I could go after work, score! This again piqued my interest so I began researching. The first thing I realized, I can not do this at my own home.

Here’s why: The tub, or float pod, is HUGE. I could lie completely flat and stretch my arms straight above my head. It’s also filled with 1,000 pounds of Epsom salt. I don’t know about you, but I don’t want to deal with buying or carting that much Epsom salt. Heh. 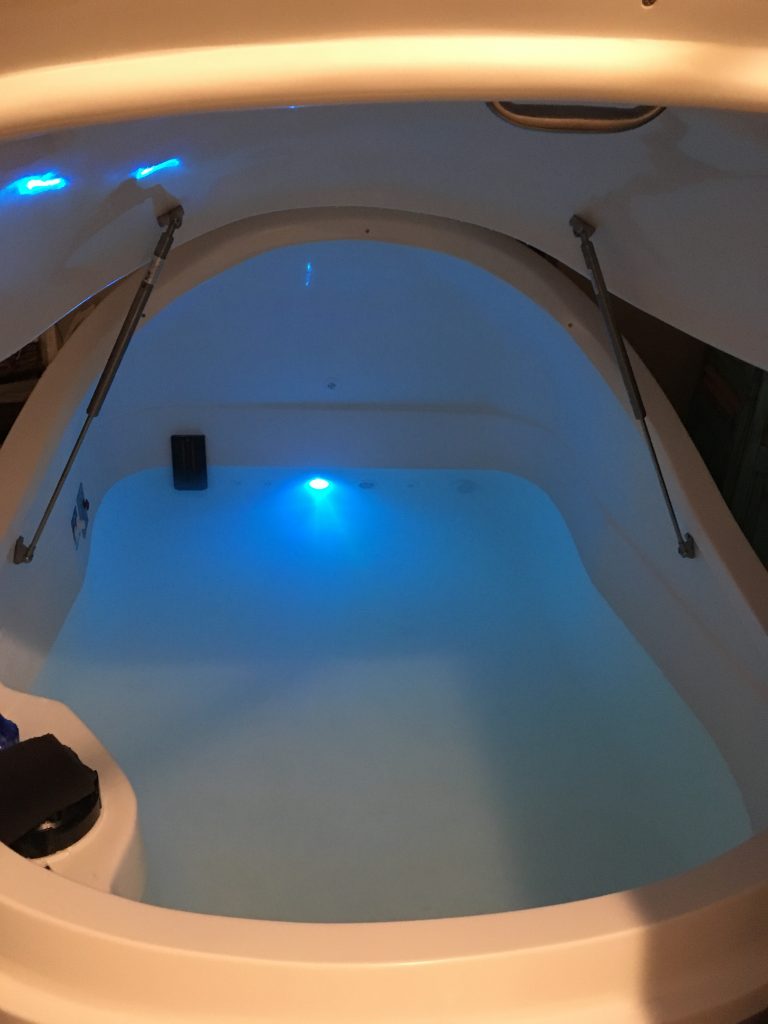 Looking into the Float Pod.

I was nervous about being claustrophobic inside the float pod, but it’s so big and the room is so dark that I didn’t even bother to pull the top down. I kept it up just as it’s shown in the photo.

The second thing I realized is that this “float therapy” is just my speed. I love a massage, but every now and again, I just want to lie still and quiet. I used to be a person who was crawling out of my skin during shavasana at the end of a yoga practice, but I’ve since turned into that person who leaves last! According to health sites, this float therapy is a type of sensory deprivation, known as R.E.S.T. (Restricted Environmental Stimulus Therapy). Since the water is the same temperature as your body it gives you the feeling of being weightless.

The science behind this technique goes back to the 50’s when a doctor was studying sensory deprivation. Then in the 1970’s the term R.E.S.T. came about. Some studies have shown that it helps relieve stress and chronic pain. I’m sure you can find countless studies and come up with your own conclusions on it. What I read seemed positive and had no ill effects. 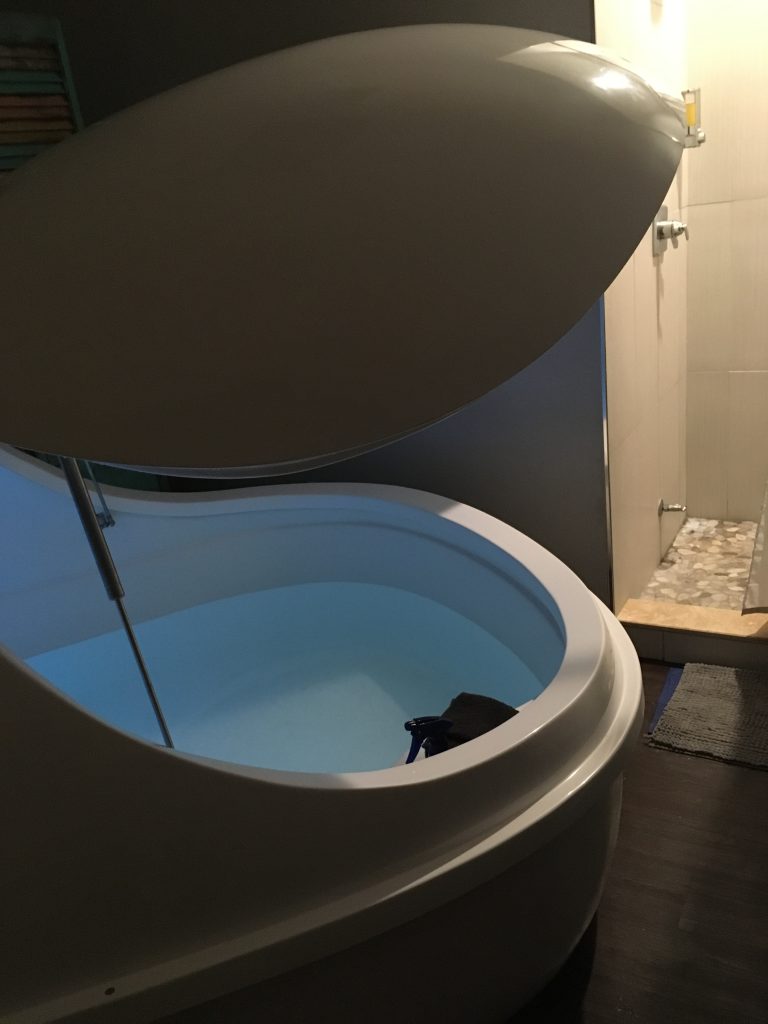 Full shot of the float pod. There’s a shower to rinse off both before and after.

I got to my float session 20 minutes early as instructed on the website and was led to the float room. The float pod, as I mentioned, was huge. It almost took up the whole room. I was instructed to shower off makeup and lotions so that they don’t get in the pod. There was a light on in the pod that I could turn off if I wanted. There was also an option for music, but I had already decided I wanted quiet.

After I showered and climbed in, I turned off the light. The room/pod went pitch black. I laid down, well sort of, I laid back and woop! My whole body popped up to the surface. I’ve never quite floated like this before. Even in the ocean I don’t feel this buoyant. If you have any cuts or scrapes, they will sting. I had a couple that did, but subsided after after a few minutes. 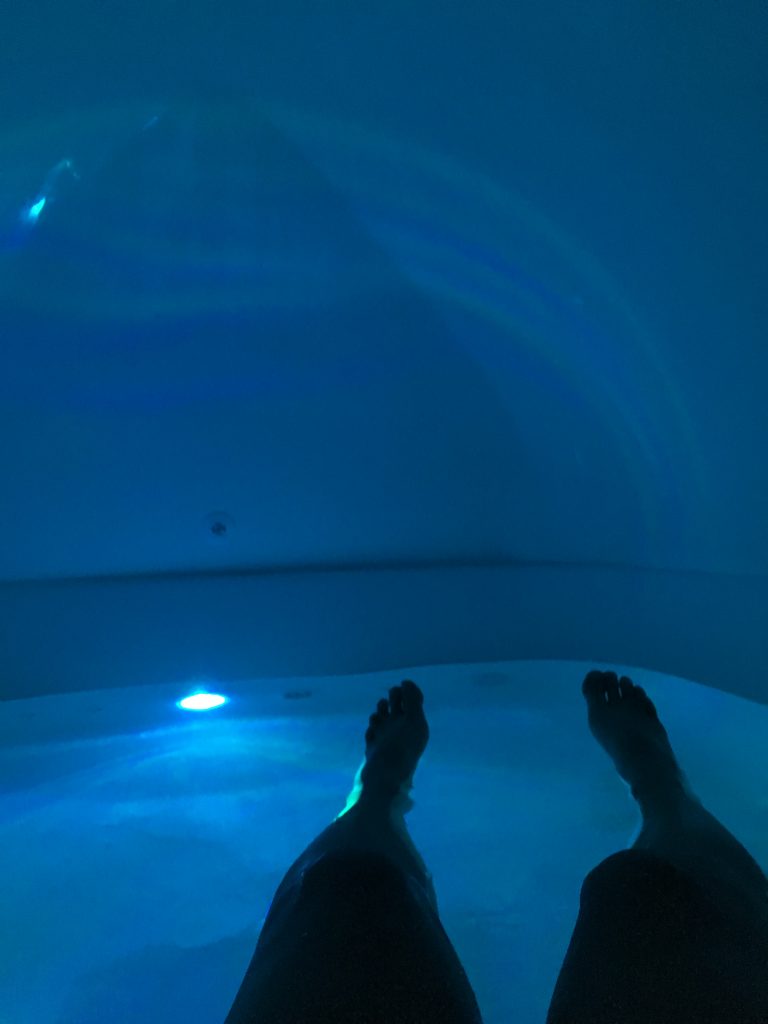 That’s how high I floated on the water.

At first, I just floated and bopped myself up and down the length of the pod to see how big it was around me. I went through my litany of random thoughts. What happened during my day, what did I need at the grocery store, what my workout was for the next day, etc. But then after about ten minutes I was able to calm my mind and just relax.

I felt the stiffness in my neck and shoulders pretty quickly after entering, and by the time I was done with my hour long float it was gone. I was close to sleep several times but jerked myself awake which was annoying, but something I do in my own bed a lot. Did I experience any hallucinations or other wacky effects others have mentioned? Nope. But that wasn’t why I was there and I wasn’t really intent on deep meditation. I let my mind wander but then really just tried not to think about anything.

I wore the earplugs they offered and got a little nervous about falling asleep but was assured the jets would come back on and wake me up when my session was over. I was sad when they did. I could sit in that thing forever. And because of the salt, you don’t get pruney! The salt does start to form on the skin that’s not underwater but it felt fine to me and I enjoyed scrubbing it off in their shower after. 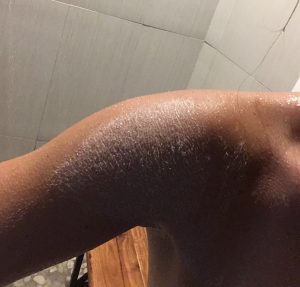 I felt insanely relaxed after. Almost like I had a massage or had an hour long shavasana. It was just lovely. I don’t know if this is for everyone, but I loved it so much that I already booked my next session! I admit it’s not a cheap therapy but I would say if you get regular or even semi-regular massages the cost is about the same. And I think anything that makes me feel this good is worth every penny!

So what say you? Ever tried float therapy?

P.S. This review isn’t sponsored or anything. I just wanted to try it and tell you all about it!