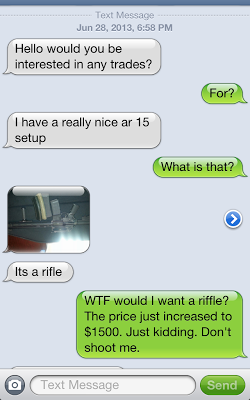 Happy Monday kids! I bet we’re all looking very forward to a short work week. And of course, this means an extra day or two of long workouts. Endurance nerds unite!
I had an awesome weekend full of rides, runs, friends, and watching Le Tour. It’s exactly what I needed after last week. Before I start with the photo dump, I have a funny story to share with you about selling stuff on Craig’s List.
The S.O. bought a new bike (bike envy, anyone?) and decided to sell his old bike on Craig’s List after not finding any local buddies interested. He got a text from someone who was interested in it and a possible trade. The texter offered him a trade on something that the S.O. and I had NO idea what was. The below text exchange happened and we could not stop laughing. Would you have known what was being offered?

The texter did respond with an “lol” so he or she knew we were oblivious to any gun buying and probably went off to shoot something trade with someone else. I have no issues with people owning guns or whatever, it just seemed so odd to offer a trade of a gun for a bike.
Now on to the photos.
On Sunday evening, I was invited to the Best Damn Race Blogger Party. It was for those bloggers who posted about Best Damn Race as a thank you. It was a great time and I love meeting other bloggers and seeing those whom I’ve come to adore. Plus, we scored some sweet swag that included a $20 gift card to local running store FitNiche. I see new running shoes in my future. Thanks for the party BDR!﻿﻿﻿﻿

Also, if you are interested in running BDR in February, here’s a $5 off discount code that’s good until August: BDRBLOG.

﻿  So, how were your weekends? Did you see the epic first stage in TDF? That ish was CRAY!