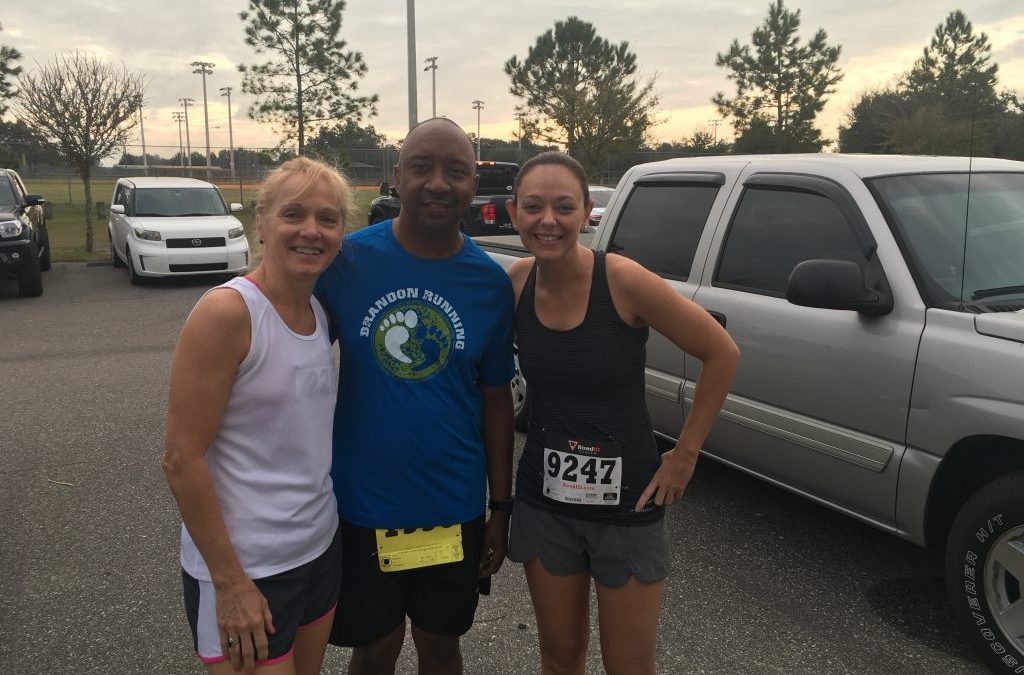 Ever since I toed the line at my last trail race, I couldn’t wait to get back out there for this one. Remember, I ran an Xterra  six miler called The Claw and LOVED it. I figured I was good to go for increasing the distance. The “xterra” basically means it’s more challenging than just a regular trail race. There is more single track and of trail running which typically means going through water and technical courses.

So on Sunday, I got up early and headed to the Wildhorse Xterra Half Marathon, located about 45 minutes away from me and actually quite near the city I grew up in. I registered not knowing if anyone else was going to race so I was pleasantly surprised when I saw friends from my old stomping grounds, the Brandon Running Association. Holly and Caribbean Steve! 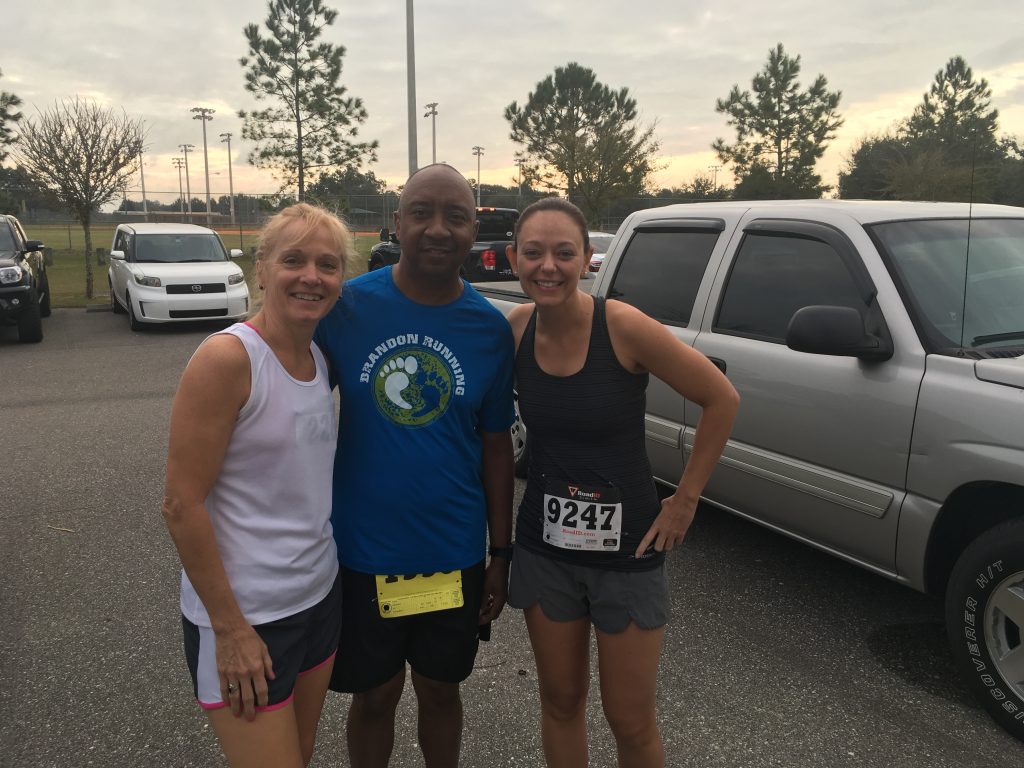 As soon as I told Steve I was running the half he warned me, more than once, that it was very tough. He did it the year prior and said he’d never do it again. Uh-oh. What had I gotten myself into? He was there for one of the other distances they had available. There was a 4 miler, a 10k, a 10 miler, and the half. I also saw my friend Erin who was racing the half and she received the warning from Steve as well. Ha! 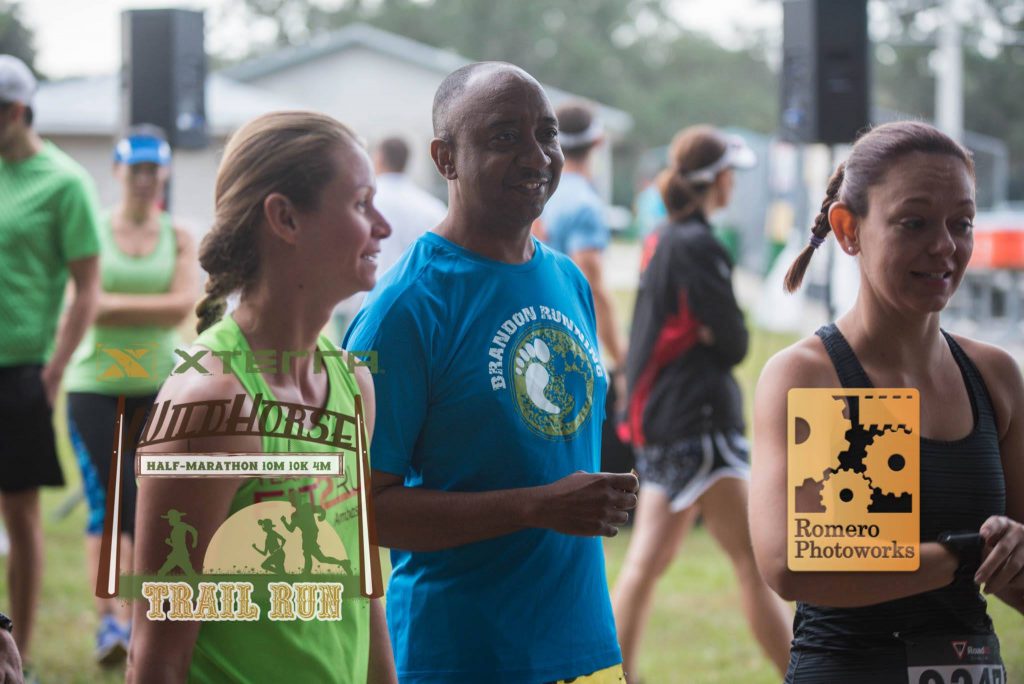 Erin, Steve and I pre-race. I love that this race as they offer free photos. Yay! Back to the report…

The half got started first and I took my time as I warned to go out easy. Thanks Steve! It was a two loop course and I was really enjoying the first three miles. As you can see from the photo below, I was blissfully unaware of what was to come… 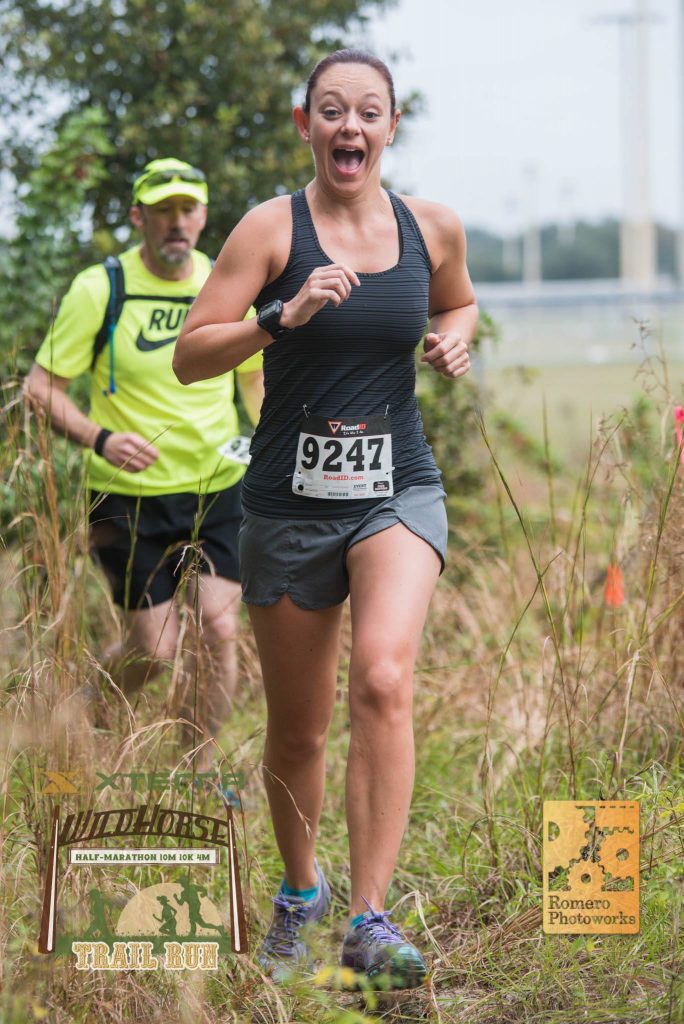 We did encounter a water crossing pretty early on, but it was nothing too scary. I’m not in the photo below, but it’s the aforementioned water crossing. We got to do it twice, once for the first loop and then again at the end. 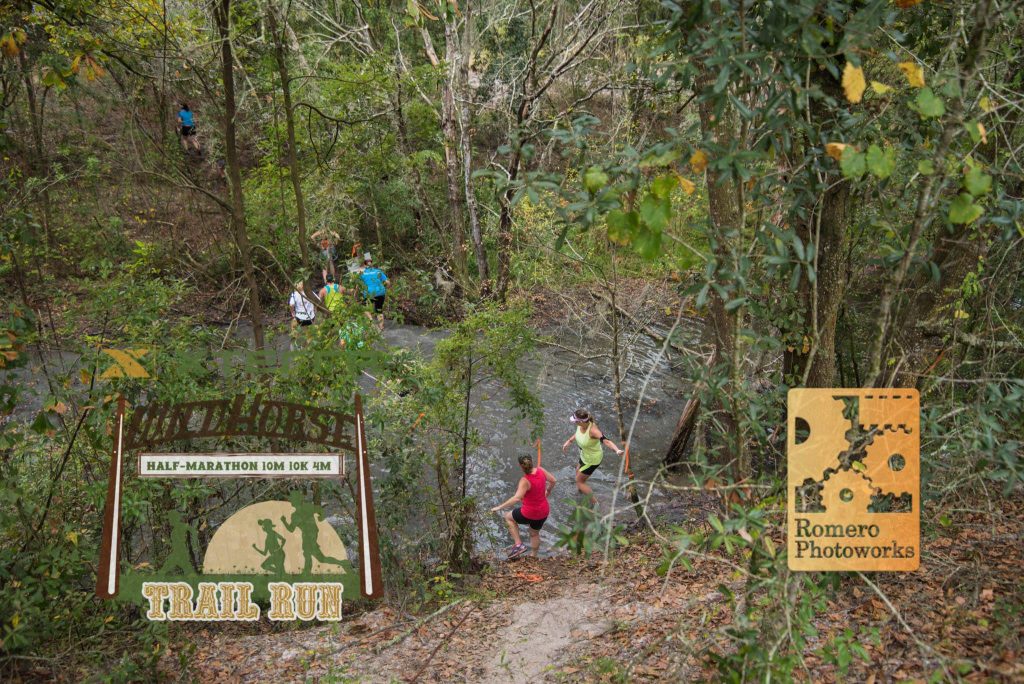 Mile four is where things got real. The trail got very technical and I basically had to let every single person behind me go in front of me. Which was challenging in itself because with single track trails above and beside some random body of green water, getting space to let others pass was tricky. I was averaging 9:45 pace until mile four. Then I hit a 16 minute mile. I inched along not quite sure how to go up and down the dirt path. At one point I lowered almost to my butt and that was a mistake. I slipped and started going down so I grabbed a tree. As I did I scraped my forearm along said tree and it began to bleed. I told folks behind me to go on ahead and I stood up and had a bit of a pep talk.

Brain: “This is really stupid. We could break something. Let’s just do one loop and call it a day.”
Guts: “No bitch. You are doing this! You just have to go through this section one more time.”
Brain: “We don’t have health insurance yet! If we break something it’s going to cost a gazillion dollars!”
Guts: “Shut up! Death before DNF! ONWARD!”

And on I went.

As soon as I got through mile six, things evened out. I picked up the pace and passed several folks who were much more nimble through the technical section. I told a few of them that I’d see them again as they passed me when we got back around. 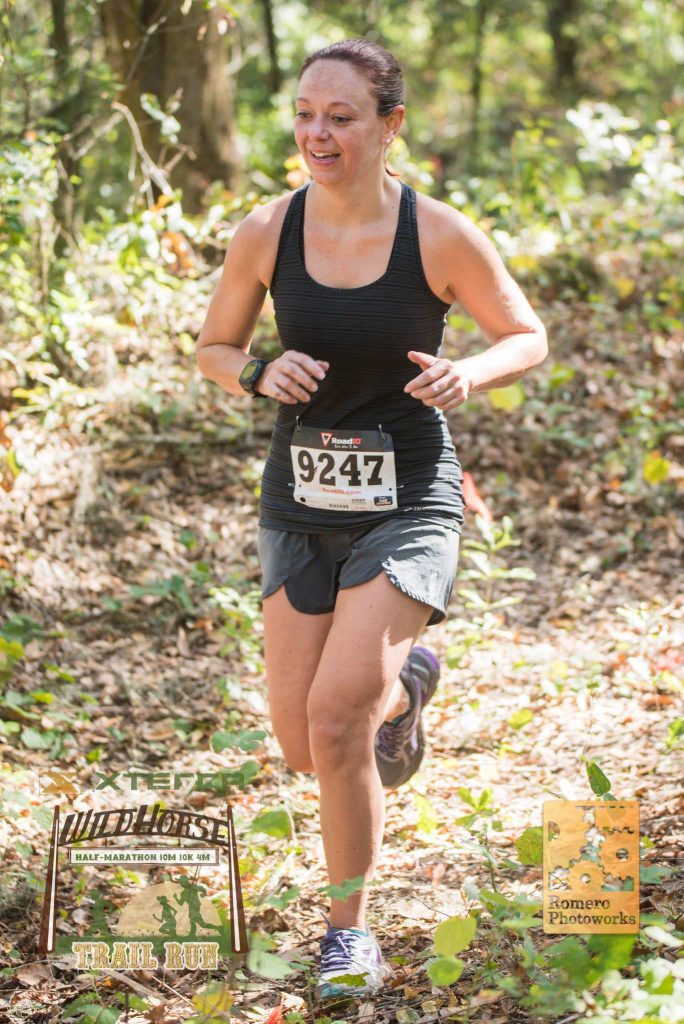 Not nearly as cheesy, smiley as before. You can also see the dirt on my hands from falling and I’m looking a whole lot sweatier! But, even amidst the falling and slowing way down, I was really having a lot of fun out there. Erin’s husband was a volunteer so I got to see him twice and the other volunteers at the water stops were super friendly. Water and Gatorade were plentiful and the weather was so nice.

By the second loop, I felt much better. I didn’t try to scoot down any trails and realized that by lowering myself it made things harder. Granted, I wasn’t running fast but I also wasn’t coming to a dead stop when the trail got interesting.

Just as I got back to the section where I thought I got to head to the finish line, there was a sign that said I had to go in the opposite direction. What the heck? So to the left I went and found a whole new challenge. There was a hill that went almost straight up and had a large, white rope hanging to the side of it. Whoa…. I began to climb up and it wasn’t nearly as tough as it looked! Hey, I may actually have more upper body strength than once assumed. Hee hee…

The trail looped back toward the finish line and I hear Holly and Steve cheering me in. What a race! It’ll go down as one of the toughest I’ve done. And yet, I definitely want to do it again! I will add that I wore trail shoes, which I almost didn’t and they made a HUGE difference. I could feel them gripping in areas that I would have most certainly slipped on.

It’s only a flesh wound! 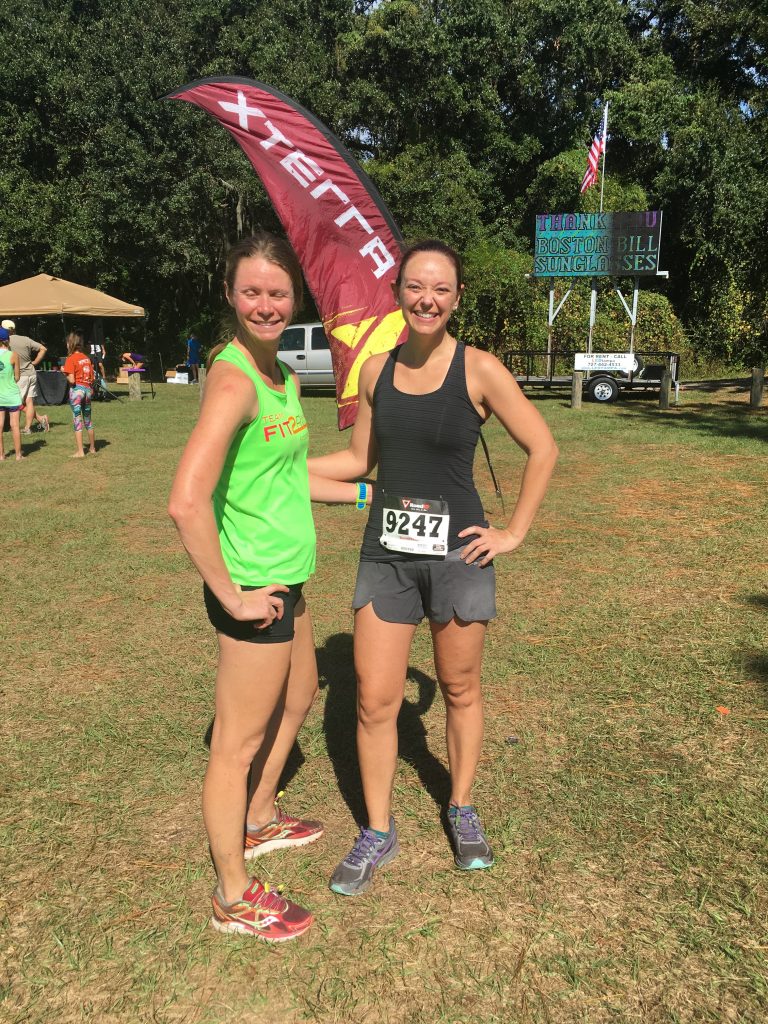 My overall time was 2:43. I know I can do it faster if I practice on those crazy areas and feel more comfortable with them. It was a great day and kudos to Erin for Going 2:27 and getting 2nd in our age group!