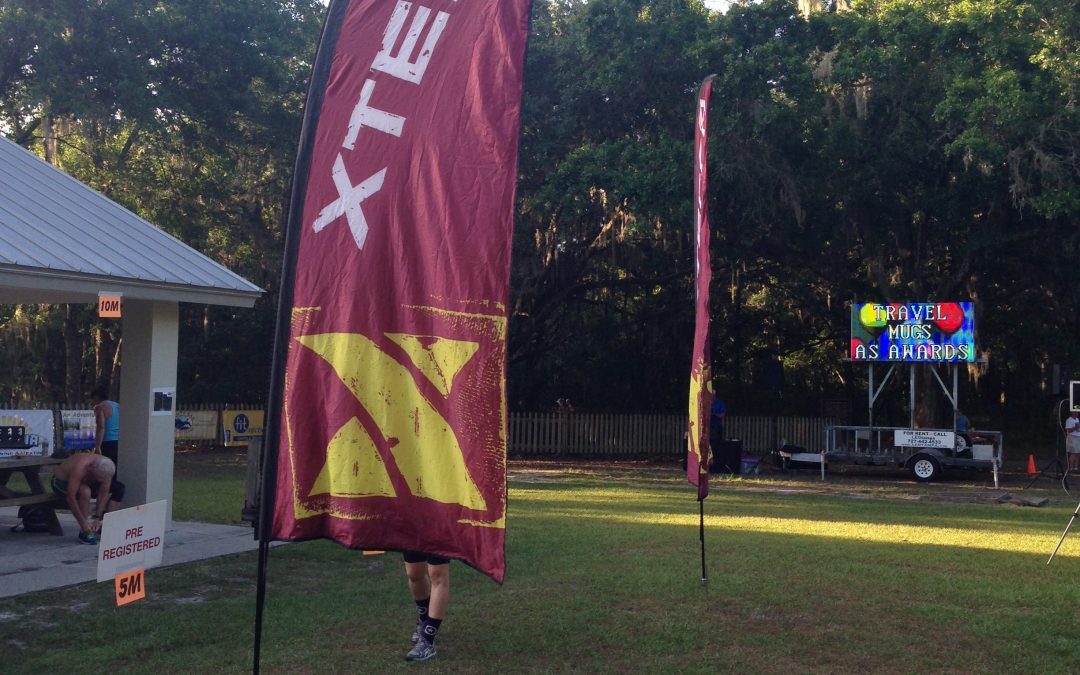 Sometimes you just need to run around in nature and get your shoe sucked off in the mud.

At least that’s how I felt on Sunday during the Xterra Claw 5 Mile Trail race.

Quick back story: As I had previously signed up for that upcoming night trail race, I figured I should run a day trail race first to see how I could handle running trails while I could see. I figured if I could stay upright in the daytime, the odds of staying upright at night were a hair better. I found this race through the same company who holds the night one and saw that a couple of friends were racing it. I messaged them and was told it was a lot of fun and that I’d be A-OK.

Sunday morning came fast and early. I woke up to a Facebook message and an email from the race organizers explaining that due to some sort of issue, both the ten mile race and the five mile race would be about a mile longer. 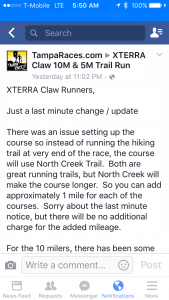 “No additional charge for the added mileage.”

If this were a road race, I’d have lost my mind. However, since this is a trail race, I laughed and thought, how nice to get a free mile in the woods. I was going to fully immerse myself into the “trail runner” mentality.

The race was about an hour away so I gave myself time to stop and grab a Gatorade and a protein bar. I had trouble choking down the bar so after getting half way through it, I stopped at Starbucks for something more palatable. I have trouble eating before races, which is weird because I am a good eater, I mean GOOD eater, so I figured anything I could get down would be better than nothing. I grabbed a croissant and was on my way.

Upon arriving, dorkishly early, I had time to run a couple of warm up miles and survey the area. I couldn’t really see the trails. I did see a map of the bike trails so I snapped a pic, even though I really have no clue what part of this map I ran. Ha. 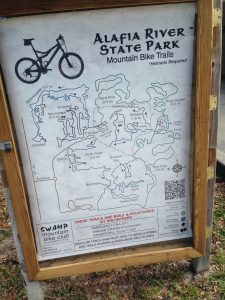 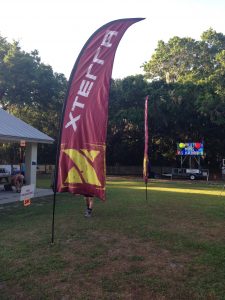 After my warm up run, I waited in line for the potty. The ten (now, 11) mile runners were harried because their race would be starting soon so several women said, “If you’re a ten, go in front!” Which was really nice. So I kept hearing, “Are you a ten?” whenever a new woman joined the line. So, of course, I said, to no one in particular, “Ladies! You’re all tens!” There were blank stares for a minute before they got my bad joke and gave me a courtesy chuckle. I may get banned from trail running…

The  eleven mile runners were off promptly at 8 AM, and we, the six mile runners, were lined up and ready to go at 8:15 AM. I looked around nervously and had no clue what to expect. I lined up front-ish as I didn’t want to get stuck behind a big line when the trail turned single track (this means the path narrows and it only fits runners in single file and you could stuck behind someone who’s maybe going a little slower than you want to be going). I also didn’t want to slow people behind me when I got slow going so I figured front-ish was as good a spot as any. If anything, it would give me incentive to not be a wimp and move my ass.

Before I knew it, we were off. I pushed the pace the first mile for as long as it was flat. But before that mile was up, we came to our first stream. It had a muddy bottom and as soon as I stepped my foot down into the muddy bottom, off came my shoe. I laughed and slid my foot back in (thanks Riplaces!) and got on my merry, now soaked-feet-way.

I slowed considerably during miles two and three and got passed here and there by a few guys and women who were more sure-footed. I tried to keep up with them and not think about breaking my moneymaker, AKA my face. I saw two spills that weren’t bad as both runners popped back up and kept going. And I told one guy behind me I could pull over so he could pass, but he said he was enjoying the break. I love trail runners. 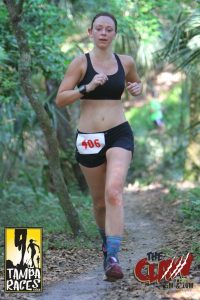 By mile four, the trail became flat and a woman came up next to me and started a conversation.

Turns out, her name is Laura and she’s a friend of a friend and reads my blog. Hence, she knows that I’m not a trail runner. She was so great to talk to and super helpful. I decided to stick with her for as long as I could. Sometimes she would lead, and sometimes I would. Our pacing was complementary and I was happy to have a friend to run with.

Side note: The race did go through two to three streams, and a river crossing that was above my waist. I can’t quite remember when all of these were but they were so fun and the river felt cool and refreshing as it was a hot day.

By mile five I was feeling the elevation changes and different muscles that are usually slumbering during road races. I asked Laura if she thought “approximately one mile” meant more or less than a full mile. She answered without hesitation, “more than a mile.”

Around mile five and a half or so, a man behind us said we were off trail. Well, shit. But, it wasn’t that bad since we were only off by one small turn. I don’t think it added more than thirty seconds/one minute to our time as we righted ourselves. That’s trail racing for you. (FWIW, the race was really well marked except this one section that was really windy, and just keeping it real here, I could get lost in a Christmas tree lot. So, thanks random guy!)

We could see one of the parking lots off of the trail so we knew we were close to the finish. My watch hit mile six and I could hear the music at the finish line. I was ready to be done! I pushed to the finish with Laura right behind me. My Garmin had a total distance of 6.13 with my time of 1:02:18 for a pace of 10:10/mile. Whew! What a race! (Official race results say 1:02:25)

I could not have had more fun at this race! Laura and I snagged top finisher mugs and snapped a pic while grabbing post race eats. 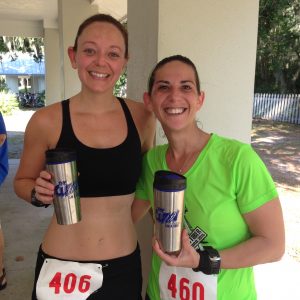 I wound up finishing 11th out of 106 women which was a surprising bonus. I absolutely loved this race and meeting Laura! I can’t wait to run more. I need to work on my trail skills and probably get some trail shoes, but I think my trail running days are here to stay. And I highly recommend The Claw. It was funny because I told people it was my first trail race and they said, “And you picked this one?!” Of course, that’s how I roll. *wink*

Thanks to Laura for running with me, Kayte and Nancy for the pre-race tips, and the S.O. for always supporting my endeavors.