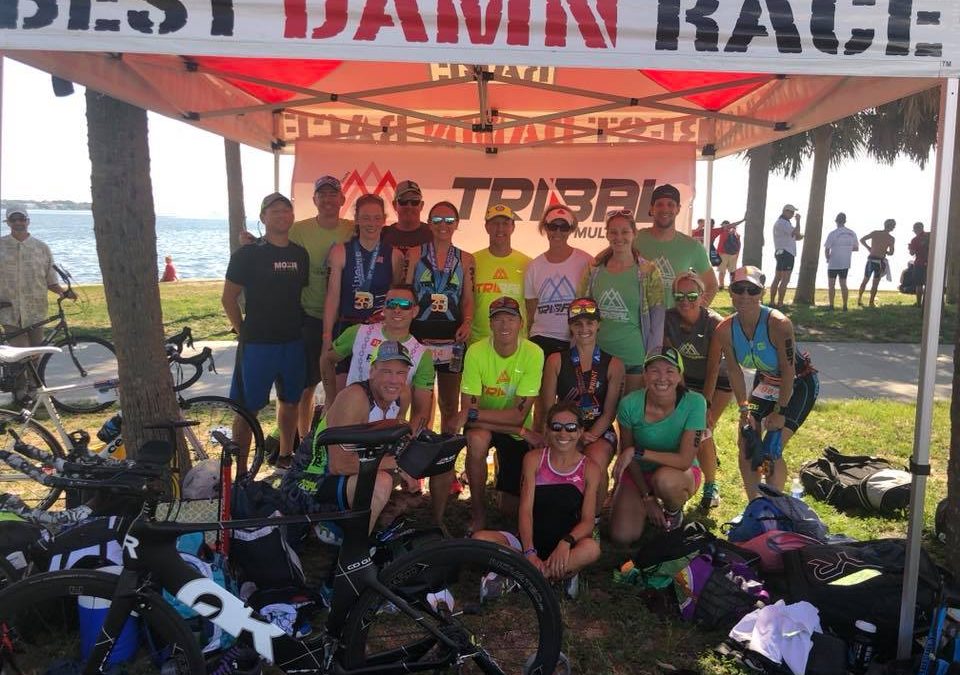 St Anthony’s was was two weeks ago and I’m just now getting some time to post my race report. I am going to keep it brief as I really don’t have a whole lot to say about it. I had a 10 second PR over the last time I did the distance in 2014. Yes, a whole 10 seconds! I should probably go pro now.

Pre Race
I was really happy to have company all weekend in that an athlete I coach named Alex came to race and stay with us! I had never met Alex in real life as I coach her remotely, though we have had lots of phone calls, texts, and Training Peaks communications. Alex is a joy to coach and we had a lot of fun showing her around the Tampa Bay area and introducing her to more of the Tribal Multisport team! 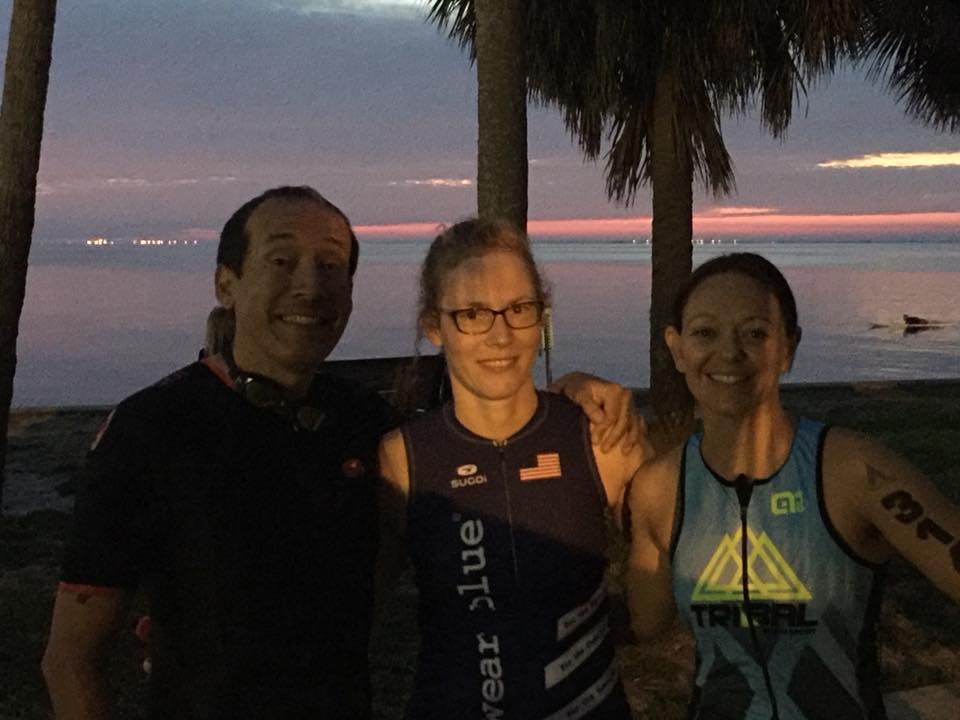 Hugo, Alex, and I race morning.

On race morning we got up suuuuuuuuper early, as you do, and loaded up the car. We were both a little nervous and a lot excited to race. I don’t believe that one shouldn’t get nervous at all pre-race. I also don’t believe it should be so nervous that you can’t perform, but nerves give the body that adrenaline boost it needs. I have gotten much better at managing the nervousness and it tends to fade into “let’s do this!” the closer it gets to go time. I highly recommend a pre-race run or swim – and give it some gas. It helps!

The Swim
St Anthony’s is known for having an unpredictable swim. In 2014 it was going ok until we turned away from the shore, the swells got big and my swim went wonky. I remember feeling a bit stressed about it and not enjoying the swim. Fortunately, this year was much better. The water was glass and though the start was, as always, a little chaotic, I had a much faster swim. I admit that I probably slacked a touch on my swim training, but I didn’t feel tired exiting the water, just ready for it to be over.
29:18 – 17th/50 in AG 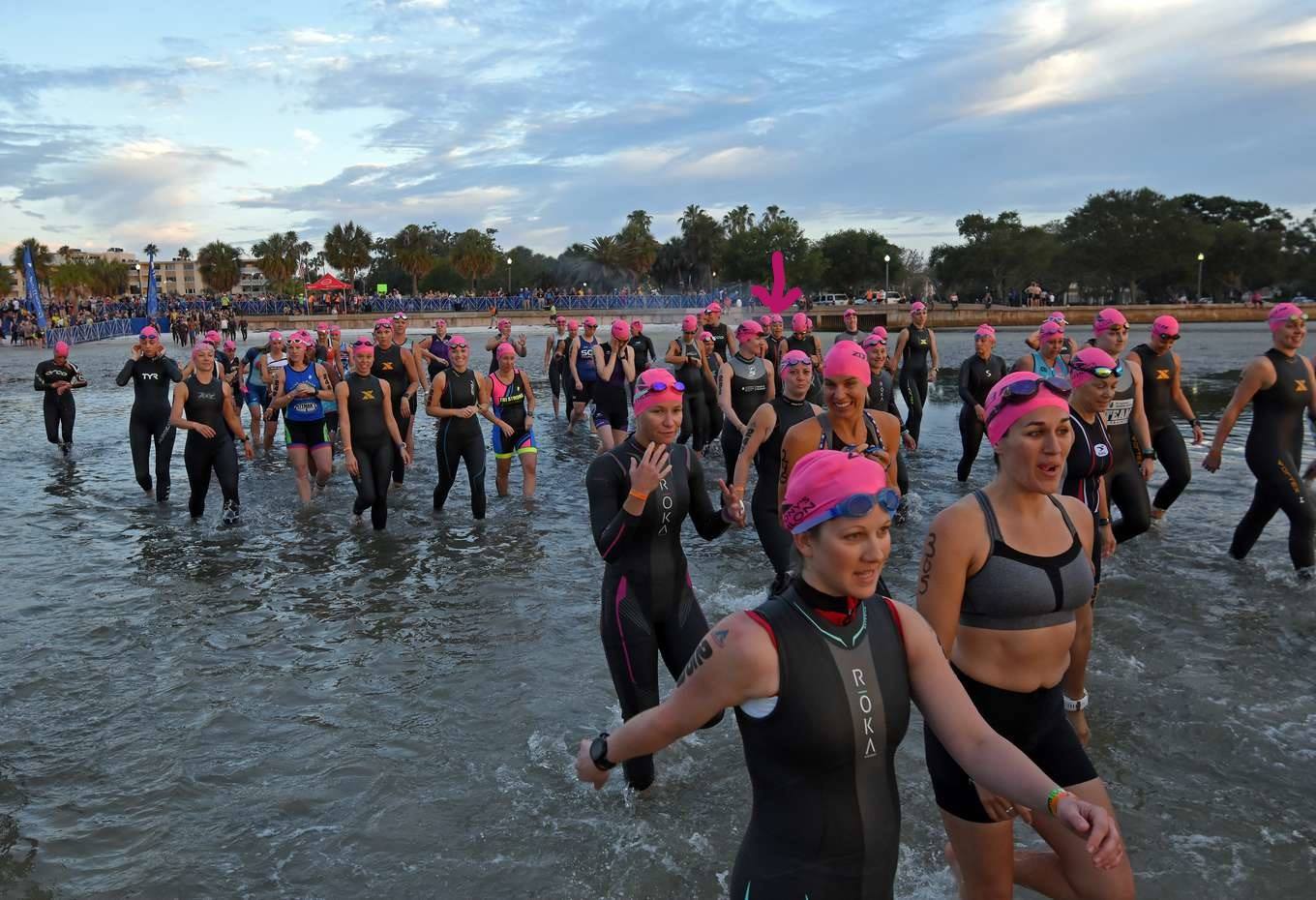 T1
I did my best to limit sandwich making, but with the wetsuit and a transition that was pretty dirty, I probably still made at least a PB & J instead of my usual paninis. (If you are totally confused by this reference just know it means that I tend to be slow in transitions.)
3:02

The Bike
Welp. What can I say? Me and the bike have remained about as close as Katy Perry and Taylor Swift. Like, we patched up our issues but we aren’t probably going to be besties. I know, I know. Trust me, I know. I’ve tried and tried. I’ve had seasons of alllllll the cycling and seasons, similar to this one, of meh. I was definitely forcing it before St A’s and my coach could tell. And naturally, it shows in my bike split. I’m taking a break from the bike in order to focus on Chicago but I’m sure I’ll come back around it eventually.

Oh, and lest I forget, the St A’s bike course is the bikiest bike course of all time. It has everything: u-turns, tight left turns, tight right turns, speed bumps, speed humps, train tracks, and a man outside on his exercise bike, etc. I tried my best not to be a granny on the turns, but I do what I do. I didn’t not enjoy the bike portion, but I wasn’t like YAY CYCLING either. I did get to see a lot of friends out there and that is always fun!
1:20:46 27th/50 in AG

The Run
I had big goals in my brain for this run, but my legs weren’t on board. And neither was my back. I’m sure I was grinding out there on those pedals and when I got the run my back was having no part of it. I told myself to just keep running and it would eventually loosen up, and thankfully it did. It actually loosened up enough for me to do the typewriter past a group of spectators playing McHammer.

Actual footage of me.

Anyway, I ran and ran. And I saw the bestie Tori with her babay on the route. She yelled, “You look good!” I yelled back, “You’re lying!” and then laughed and kept on moving. Coach Jon passed me at some point and said “let’s go girly” or something and I told him I was coming. No way I was keeping up with his gazelle ass. I was very fortunate to have an early start so it didn’t get hot until mile four, and by then I was almost to the finish line. I was really happy when I finally saw it and I tried my best to crank it up a notch to get there. 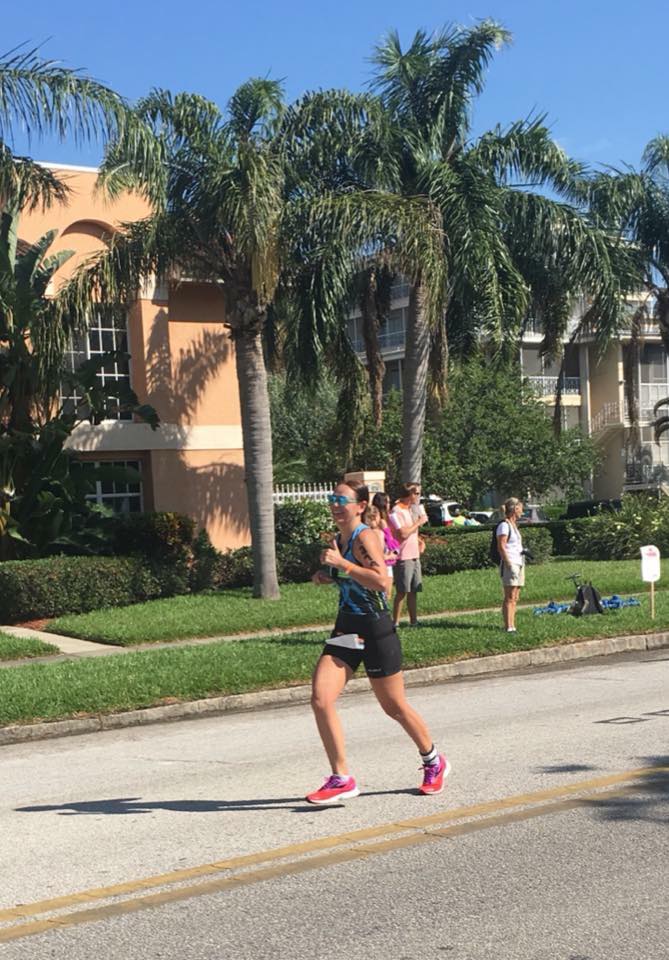 Alex had a big PR of 6 minutes and survived her first ocean race swim! In fact, she kicked a lot of ass out there! Until next time everybody. Peace! 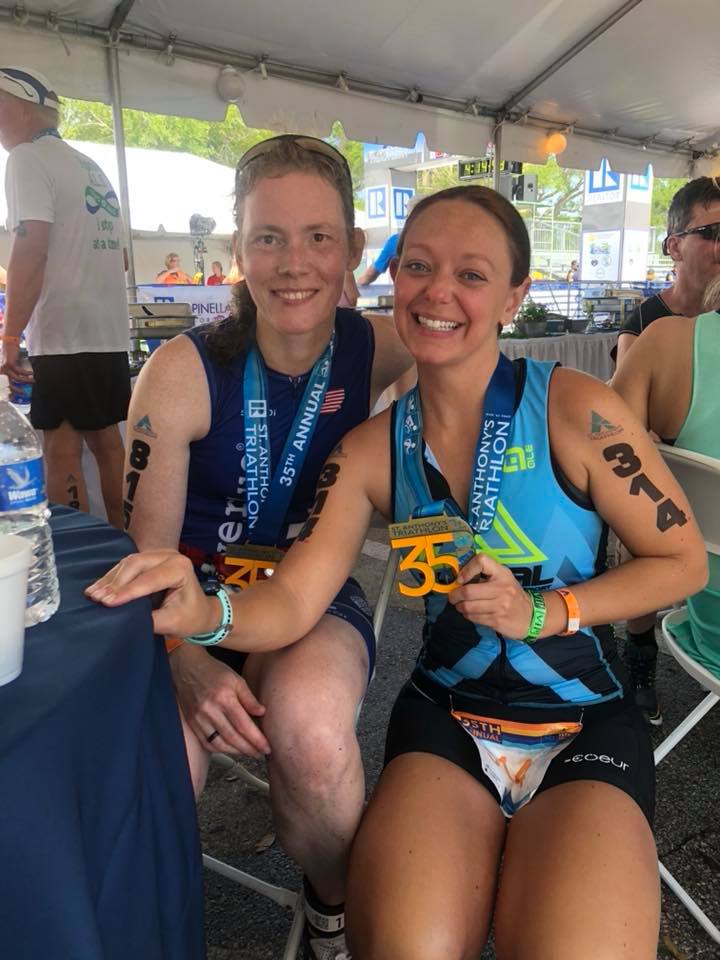